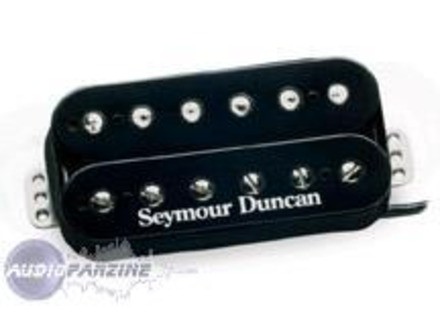 Seymour Duncan TBPG-1 Pearly Gates
4
The Seymour Duncan Pearly Gates is designed to be like a standard P.A.F pickup, but with that little bit of extra "mojo," as requested by the Rev. Billy Gibbons. I purchased this pickup used several years ago to install in my main ax at the time, a 1985 Tokai Flying V. I was unimpressed with the cheap EMG knockoff humbuckers that had been installed by a previous owner and so I decided to purchase a more vintage voiced bridge humbucker to make it sound a bit more vintage and less processed and digital sounding.

Now, this is supposed to have a connection to Billy Gibbons, ZZ Top's guitarist. I don't listen to them, so I can't really make a judgment on how close the tone of this pickup is to Billy's P.A.F in the Pearly Gates Les Paul 'Burst, but based on what I've read about Billy's gear choices, it sounds like it is pretty dead on to what the Pearly Gates PAFs sound like. It's got that classic mild overdrive tone of the Gibson humbuckers of yore, but hidden somewhere inside is a bit of extra kick to push the pickup to a point that it's just over the top enough to scream. It's not a ridiculously high output pickup either, so don't buy it expecting gobs of saturation...

I particularly like this pickup because it fits right in with my theory on getting a good hard rock tone. I prefer to get a lower output pickup and make the amp produce the saturation. This allows me to use dynamics and not be stuck with a ton of output from the pickup. The PG is a prime example of this. I was able to use it for the rock, jazz, and blues projects I was in, using a mildly overdriven sound as my core tone, rolling the volume back to clean up the volume, and using one of my overdrive pedals to push it to the limit.

All in all, I was extremely impressed with this pickup when I owned it. I tried it in a few different guitars over the years, all with the same great result. Seymour Duncan definitely has a winner with this pickup. If you're after a great all rounder pickup that won't break the bank... give this one a try. You won't be disappointed!

Seymour Duncan TBPG-1 Pearly Gates
5
This micro original team in the bridge position, a lonestar strat of 1997, it is coupled with two texas special.

The overall result is to obtain a grain relief "grainy" and "hoarse" in the mids, coupled with some transparency in the treble, which puts it on a vintage and modern at all.
the output level is higher than the classic 57 example, or of burstbuckers at Gibson, but below the modern humbuckers, eg type SH 4.
this is an average output level, agreeing perfectly with Fender Texas Special.

I use it mainly crunch way TS-808, in my deluxe reverb, tuning in open G.
in this configuration I am always struck by the sound I get with this strat which is close to the spirit Gibson, George Thorogood way (one of my idols ...), however, obtained by this guitarist, specialist slide, on Gibson es-125 with P90 dogears.

For clean sounds or light crunch, more typed "blues" (BB King, Luther Allison), I am less convinced, the classic 57 & 57 +, the burstbuckers 1 & 2 are silkier, less "angueleux and nervous" that the pearly gates, what, personal, suits me better.

the mysteries of violin and electronics are so impenetrable ...

Finally, I would say to fans of Gibson Les Paul that he should really be "terrible", mounted on a guitar of this type, it must ZZ Toper to death ...

A link from one of my vid. with this mic in exclusive use.

I put 9 (nobody's perfect), because he really coarse 'southern Texas and "blues-rock and gives a character a true Gibsonian Strat, which is no mean feat.

Serial riffer's review (This content has been automatically translated from French)" Hot & Spicy!"

Seymour Duncan TBPG-1 Pearly Gates
4
This is a microphone that I use for some time on my Les Paul. I abandoned a long time to try other things and finally back to this solution to give a rather oriented blues-rock to my Les Paul.

The microphone has a grain close enough to the famous 59 but with a marked hump in the mids which offer a breakthrough in the mix quite noticeable, without going overboard, we are far from their boring that can get a JB.
The Pearly Gates sound is typed for grain coated with the Les Paul but adds that little extra that makes the notes incandescent, a grains generally more transparent.
It responds quite well to the knobs volume and tone controls, RAS on that side.

If you plug a Les Paul fitted with this mic on an amp British typed, we will soon be floating in the waters of Lynyrd Skynyrd (Listen to the intro to "Gimme Back My Bullets" micro Bridge or Warren Haynes & Gov't Mule level neck position). A micro typed so, exit jazz, metal ... you can go to the Hard limit must be good but not too much to ask.

In short, an ultra micro satisfactory as to what it claims to offer more on the standard 59 ... the price is highly competitive but hey let's not lose sight that remains in a production factory, far enough from what other brands small shops offer in terms of quality in the fields (but it will cost not far from double the price to get there ... it's a choice)

A small Bémol is the failure to propose that the mode 4 son, used to be rather questionable in my opinion for vintage lovers like me who like both their son more conventional instrument ... but hey .. .

setneck's review (This content has been automatically translated from French)" well"

Seymour Duncan TBPG-1 Pearly Gates
4
As described throughout this is a bang to the sauce Texan, it is mounted on a strat texas special, it is perfectly balanced to associate with micro simples.Pour continue the comparison with the SH4, I confirm the information Semour duncan: moin power (nickel HSS), more acute (unlike the previous review), less bass, less harmonic. Basically it's a vintage version SH4, it is certainly capable of equipping + either a gibson or a fender, unlike the SH4 which, by its power and equa, will only denature a Strat.
Basically it's not a modern micro, if there was a scale from jazz to metal to rock it would not force it to be beyond juste.En big is not a Swiss Army knife, but a micro micro well-typed , racy, with its character.

Did you find this review helpful?yesno
»
Read the 8 user reviews on the Seymour Duncan TBPG-1 Pearly Gates »