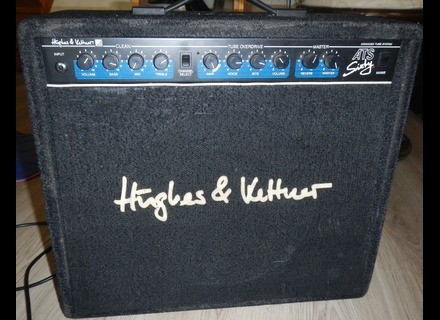 moi81's review (This content has been automatically translated from French)

Hughes & Kettner ATS Sixty
5
Everything was said below

I play punk and rock with an Epiphone Les Paul Standard is it suits me perfectly. Powerful with a good overdrive. A little trick Gnant when the master button and almost in the background and that you do not play a sound and ague stridant occurs but his is surment I wave a cot so rine of serious. Heavy enough for a 65W

TRs good amp ^^
Did you find this review helpful?yesno
»

Common Fates's review (This content has been automatically translated from French)

Hughes & Kettner ATS Sixty
5
Hi,
TRS is a good amp I used for many years. C'tait also my first I think!
Trs good sound.
I did not know of too amp but it has been proven.

Could not be more simple to use and the sound is clean trs.

Jou I rock and I love it when a slap. My friend who was silent on Fender-t surprised

I use it for a decade and I think he always does nickel.
C'tait my first amp but who knows if I aid.

plisfoss91's review (This content has been automatically translated from French)

Hughes & Kettner ATS Sixty
5
Preamp tube overdrive + lamps (tube does not mean transistor but lamp!) Or the name of ats = advanced tube system. it's 60watts (sixty).
conection: a jack in a high impedance headphone out a line out 1Volt and send and return effect.
3 band eq and volume + overdrive with gain settings cock and voice volume + reverb has a parameter (size piece I think) and master.

Configuration very easy too even. but nevertheless gives a very good sound super easy. the tube preamp gives off very pleasant overtones.
g pa y 'and frankly the manual requires that if you really know what it is an amp.

I think this amp can agree has a lot of musical style with still a small problem for all big rocks a distortion, it is a little too clean for that, yet the addition of an exfoliating effect easily in this défault.perso I have an ibanez guitar with rg470fmr Micos base so it's not optimum but already very good, having already tried with vintage guitars ex: les paul it's magic ...
Playing mostly steady and reg / rag, I use mostly clear sound with sometimes just a small disto his pass nikel! The preamp tube gives off a very pleasant and harmonic breath fairly large but quite characteristic of lamp, has two of them réchaufent the sound dramatically.
destester has no sound unless you know the deal.

I use it for ten years and I buy ocaz He walked the thunder.
javais marshal has a new lamp but in two years I had to change three faith lamp. so that it costs 3.4 times more !!!!!!!! I have not had a failure with the ats!! excellent value for money even if it is more than 300 150euros.
yes I would do this choice, but his purchase was just one occasion on which I fell in hasrd not regret it for sure
Did you find this review helpful?yesno
»

duck.d's review (This content has been automatically translated from French)

Then it's the following day or forcment not agree with the previous ones opinion
- Trs trs clear sound from jazz to funk right through a good bluesy, all playing on mdiums and treble of the amp and itches

- Its a big crunch for the blues hendrix nickel: volume of clean background and party C, even with a big scratch shit trs sensitivity of the amp it's been dead plaiz

- .............................; Then the distortion should be expected to do the same with a guitar ACDC What was not made for a best rock seventies and still not always C trs own. It looks more like a crunch too and saturated fat. A little better with a scratch but good pro ca n'atteind not extreme heights of pleasure ....

The big advantage of this amp, the output level .... If you push the master ca clean does it well and it's not worse than saturated low .... It works best for Marshmall ke Peavy or some local rpt Rouen ...... no name DSOL but there might be ki see what I am referring ...

So I put it qd ke 7 because even a good quality rappoert price: jl bought OCCAZ 100 euros and was worth the cost ca