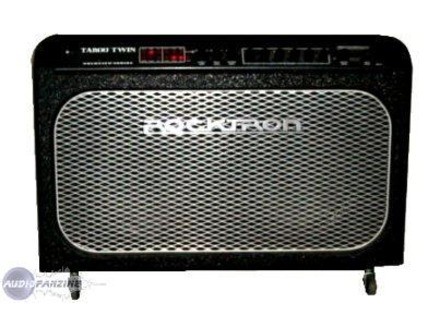 Rocktron Taboo Twin Combo
5
Trasistor amp 2x50W, 12AX7 tube preamp.
Level connectivity is everything from the entrance to the course instru inputs and outputs effects loop (jack + XLR) adjustable stereo XLR outputs to feed a table (adjustable gain). Connectivity also twelve o'clock (in / out / thru) then re-connection noon for pedal control (for me a Digitech Control 8) ...
Level effect is enormous. It has 128 programmable presets almost to infinity in terms of mixing effects. All effects are adjustable before and after the effects loop and in all directions. Monstrous ... but complex.
The footswitch allows twelve o'clock tons of things too. With an expression pedal (which can be attributed to any effect) or not, you can call a particular preset, the change in real time or control a sequencer or other instrument ...
Ah yes, important, the amp is patchable, in other words, noon, connected to a computer, you can load all the sounds found on the Rocktron site ... and thus share with other users who have put their patches online. That is good!

Simply can not say ... Especially I'm missing qques buttons (rather fragile and travel by truck did not help). Everything is configurable, it's cool, but the fuss soon enough. Finally, I returned to the factory sounds (for some) and I dug into the database for Rocktron qques nice patches (listen to see U2!).
The manual is needed (downloadable from the nenette). It is clear and precise (thus making him head also not sound engineer).
The factory sounds can already get a good sound, working a little, we can carve out "his" sound and that's nice. Restitution is terrible power and precision (2x50W RMS gmelles with 2 12 ").

It is suitable for all ... 127 presets (128 with mute), imagine!
Clear of falling, the slight crunch to the addition of distortion tomb (with lamp), everything goes with happiness. The reverb and delays are also enormous.
Any type of scratch is benefiting. I played in band (pop / rock) with the Latin and hard rock (and thus the electro les paul through the Strat and Parker), nothing scares him!

Since my purchase in 2004. I have somewhat neglected in recent gst. I'm more about multi-effects and amplifiers.
I'll put it back.
I wanted a model that allows me to send in club but also to connect me to a table with friends for a good mix, or even connect to my PC. It can do everything with Brio.
For this use, today, for sure we can have x devices to manage all that. But all in one, without making a duck (ie something that does everything but very badly ... well look at what a duck walk, fly or swim!), That was not won!
In the same context, I do it again this election, yes.