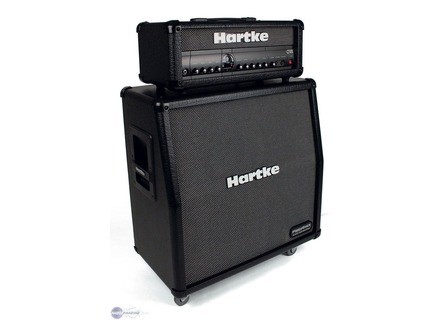 Piggy Back GT60/408, Hybrid Guitar Stack / Half Stack from Hartke in the GT series.


Amplifier: the GT60 Piggyback is a head with a cabinet, but smaller than usual. Features: two channels, one of which uses a tube. Channel 1 has crunch, volume, treble and bass. Channel 2 has gain, volume, bass, mid, treble. There is a reverb that works equally for both channels. There are output jacks for speaker and for headphones(!). There are input jacks for effects as well as for a CD Player sound(!).

Sound: very versatile, but isn't so natural as a JCM900. Channel 1 may be a bit 'clinical', without warmth, but the distortion sounds closer to 'natural' than the one on Channel 2. Channel 2 sounds closer to 'natural' when clean, but the distortion has an artificial impression to me. Still, Channel 2 is warmer for a slight overdrive. The fundamental tone reminds me of the 80's pop/rock as Huey Lewis. Still, I could get a trebly distortion resembling NIN, a fuzz sound (bassy, though) revealing some Down By Law, a subtle overdrive that showed a hint of Pink Floyd, a classic overdrive that resembled Rolling Stones and maybe the Beatles and a very clean sound as well. I find it terrible for vintage stuff, though. I think it can do a good job for general pop playing or any style that doesn't worry about a natural sound and/or sound refinement.

Response to Pedals/Guitar/Pickups: a trebly pickup will sound trebly, a bassy guitar will sound bassy, a mid-range pedal will sound mid-range and so on. The Piggyback doesn't mask much the sound of the pedals (SansAmp Classic, Boss CS-3, OD-2 and GE-7) and pickups (DiMarzio Air Zone, Fender Tex Mex and Fender MIM Standard) I tried.

Construction: despite the tube presence, this amp doesn't look fragile and shall do great as a working horse, rehearsal amp and live equipment. This amp still needs the usual maintenance as any other.

Rating: I'll give it 3 stars for it's steady, versatile, but doesn't provide a refined sound.
PS: I don't use the reverb because it generates a annoying humming. I think my unit in particular has a problem.

Hartke Piggy Back GT60/408
4
This is a hybrid amplifier head. It is best described as a half solid state, with a 12aX7 tube for a tube amp feel. It is rated at 60W, and I would say that rating is accurate based on the volume. One input with two channels. One is a clean channel with volume, bass and treble. It also has a cool knob called &quot;crunch&quot;. Distortion/overdrive channel has gain, volume, bass, mid and treble. There is also a reverb knob that controls both channels. There is a manual channel switch button, but there is no foot-switch included. There is a footswitch jack in the back, so there must be one you can buy. In the front, there are headphone and cd jacks. To conclude the back, there are effects send and return, as well as a minimum 4 ohm speaker output.

This head is fairly straightforward. It’s you basic 2 channel head with clean and overdrive. I put both channels on bass 2,mid 0, and treble 10, and it sounds decent, To get more thump out of the matching 4x8 speaker cab, I sometimes turn the bass up to 6 or 7, and it sounds pretty good. I don’t think the head comes with a manual, but because of it’s simplicity, I don’t feel that it really is necessary. I use this amp for rehearsals and the stage, but now I use it to practice with because it’s kind of cumbersome for rehearsal and the cab gets put in a box when I play on stage with it, which I think renders it useless.

By themselves, both channels sound OK, at best, in my opinion. The clean does not shimmer enough for my needs and the 2nd channel is a mediocre overdrive, and definitely not a distortion channel. The good news is that this amp appears to take pedals well, I don’t know if the 12ax7 tube has anything to do with it. I play my beginner level Ibanez through several effects, including a Zoom 505 multi-effect, and I can get a world of sounds and tones that mimic many guitar stars, past and present. See previous sections to see my settings for treble, bass and mid. Because it takes pedals well, I have many favorite sounds. I don’t know what to make of the crunch knob on the clean channel. It can provide a nice tube type breakup at lower volumes and pure overdrive at higher, and sounds good on its own. But when I introduce pedals, especially distortion/sustain on top of it, it sounds very muddy and TOO crunchy. So while it’s a great volume boost, it’s not a great lead boost.

I have used this head for almost 5 months. I think it serves its purpose, which is a gig/performance ready amp that has a nice bottom end and adequate volume. I wish the channels had a better tone by themselves, especially the clean. But since it takes pedals well, I can live with it. I bought this head with matching cab for $180 at Sam Ash. Where can you get a brand new half stack whose bottom end can compete with the big boys for less than $200 ? If I could buy another one for $180, and I had the money to spend on it, I most certainly would, seeing as the greed-meisters at guitar center are selling the USED cab ALONE for $159.99 !

oazard's review (This content has been automatically translated from French)

Hartke Piggy Back GT60/408
Hi
What footswicht buy for the piggy back of Hartke?

To
Did you find this review helpful?yesno
»

Hartke Piggy Back GT60/408
5
It is a half-stack hybrid 60W with 2 channels: the first using the lamp circuit (clean channel) and the second transistor circuit (channel 2).

Connection "could not be more simple" with a baffle out its assigned management: a 4:8 "

At the rear there is an effects loop, and everything right from the amp there is a spring reverb.


Gets it easy to sound good?
mmmmhhhh .... that we will talk about it in the relevant section.

So I make music for many years now and I started playing guitar a few years ago. I've been enormously different styles, from every angle metal, blues, bluegrass, rock and roll, etc ...

But let's talk about the sound of this amp. One thing to know: Only CHANNEL 1 (clean) is usable.

The second channel is purely to vomit. For cons, the clean channel is really AMAZING, and I did not expect that at all in buying it. Who cleans the superb potato, a bluesy crunch hyper and catchy as failed ... a real killer (I play regularly with the John Butler my 12-string electro top and it really is perfect). This channel supports ALL denature and without giving the amps a typical heat lamps. I spent a number of incaculable distorstions, marshall, warpzone, Silverdragon, OD1, Tubescreamer ... and the amp has always followed beautifully.
To say it anyway, I played with guitars and a superb luthier Orange amp, and yet I can not separate myself from my little Hartke even if I do not play with too.

It really is a try: 300 euros for nine and a derisory price in time, you'll take.

I have this amp for 5 years now. Meanwhile, I played on Marshall TSL 2000, Orange Rockverb, short of good big amps in its mythical

The +:
Its great clean channel, and completely transparent to the pedals that it sticks in the stomach
-His face (yes it's still a half-stack head cabinet) super simple
His office-4x8 "who does not pay mine. Could think it is feeble, but I said THAT NENNI! He spits the monster!
- His surprise
its effects loop (because it not eat bread, and it's always fun)
Its value-price floor plate any other brand

-The second channel which is literally a throw
Its reverb-lacking enormously presence of
and ... that's all.

Did you find this review helpful?yesno
»
Read the 14 user reviews on the Hartke Piggy Back GT60/408 »