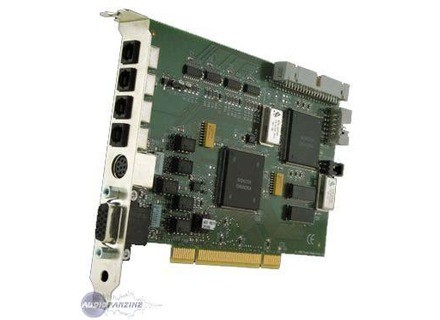 Philippe Hélard's review (This content has been automatically translated from French)

Frontier Design Group Dakota
5
There are more than distributor in France. I buys directly here in the USA, trssrieux store:

PS: I do not have this card, I have not been able to test the 10/10 did not match anything. But I know the Frontier products because I use them for 6 years. They are of high quality and have peaufins drivers. This is the card I achterai to accompany my Yamaha 01V96 future.

RAS
Did you find this review helpful?yesno
»

jppineau's review (This content has been automatically translated from French)

Frontier Design Group Dakota
5
I had a dj setup 32 tracks ADAT and I want to bridge these recorders with my DAWs. I also use my analog console and dynamics processors and outboard effects. So, the Dakota and Montana taient a logical choice to continue and take the life of my equipment. As a bonus, there are possibilities with the duo cards Dakota and Montana ADATS the grate for those who may have INTERESTED.

Easy installation, the manual is short and simple and is no incompatibility reported. point it works!
A bit of confusion with the choice of synchronization of clocks beginners but the interface allows to quickly find and CONTRL I / Os. Basically, a normal learning curve.

Stabibilit copy, no crash in 5 years. The updates have followed the revolutions of the OS and since Frontier Tascam has taken under his wing, in addition to Nemesis (GigaStusio), everything goes smoothly, this ct. Easy grate in SONAR, Samplitude, Audition, GigaStudio, and others, I get latencies below 2 milliseconds with a lot of plugins and based softsynth. GigaStudio with no latency. I was able to record 32 tracks simultaneously ... because it is the maximum allowed by the cards ... and that, even with a less powerful PC, around 2004-05.

I never regret this purchase. In addition, Frontier Design has a service user who largely Exceeds the average of all those with whom I could be in contact in the past. The only thing I wish is to be able to spend more levs chantillonages speeds but we are limited by the ADAT here. Given that a system that all c'west Intgr which also allows the addition of a MIDI interface that eje possde elsewhere, it's a report qualitprix. In addition, you can choose the appropriate converters budget. The cts are less positive than kes cards are PCI, which is a standard threat and that, once we move DSIR else, the midi interface unusable. We must sell everything once.

)
Did you find this review helpful?yesno
»