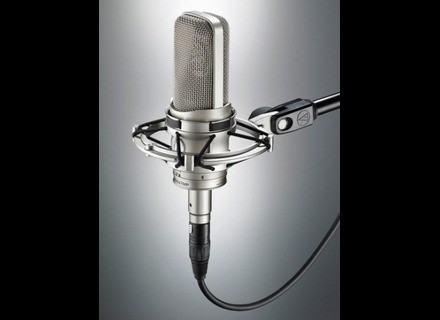 All user reviews for the Audio-Technica AT4047MP

Average Score:4.0( 4/5 based on 2 reviews )
Buy this productView price information >
Not satisfied with those reviews?
Our members also liked:
Buy at Sweetwater

The thing that I like most about it is how well it captures the recording, it can be used to record strings, guitars, electric guitars, pianos, instruments ensemble, and of course vocals and choir.

This mic is a pretty good deal if you want to spend more money and get better sound quality, it costs nearly 1000 $ , however the features provided by this product are pretty crazy, it has a custom shock mount that provides superior isolation, also a Integral 80 Hz high-pass filter switch and 10 dB pad switch.

The precision and quality of sounds is outstanding, I really do enjoy the quality provided by this product however I would consider buying something more new, because this mic has some years behind, that's why I would rate this mic
8/10.
Right now you can find something cheaper but that is pretty equal in terms of sound quality and precision of the sounds.

I tried several condenser types of mics , this has has a big advantage, the low noise and the precision of capturing the frequency range.

However I don't think I would buy this mic again because you can find something better and that doesn't cost as much as this mic does, so keep that in mind if you're searching for a podcasting mic or a vocal recording type of mic.

Audio-Technica AT4047MP
4
The Audio-Technica AT4047MP is one of the higher end models of large diaphragm condenser microphones that AT has to offer. The mic boosts the ability to pick up sound in a variety of different ways as it has three different pick up patterns to choose from including cardioid, figure eight, and omnidirectional. I've only used the microphone in a recording studio setting, and really wouldn't recommend using it for any other kind of use as this is what it is designed for; it's too expensive and fragile to use for live shows or anything like that.

I first used the Audio-Technica AT4047MP a few months ago, and since have only used it a handful of times. The AT4047MP is supposed to be a more 'vintage' sounding microphone, as I imagine that this would be one of the most popular complaints when it comes to Audio-Technica mics, as I know that warmth is vibe is definitely something lacking in the line of microphones made by them. I can't say that it has as much warmth as the big boys out there do, but it is definitely a step up from the other models. The mic is suitable for just about any sort of application that you'd like to use it for, as the switchable pick up pattern allows for some versatility, but I've only used the mic for recording male vocals. For this application, the mic definitely did a great job of picking up the full sound of the human voice and I also felt that it the sound came in with a lot of clarity and fullness. However, they would like you to believe that you're getting a more 'vintage' sound with this mic, which is something that although generally hard to define, isn't present here. This isn't a bad thing for me, as the mic does its job well and that's really all that I can ask for. The price is a lot more costly than the other microphones that I've used from Audio-Technica. Having said this, you should definitely be comparing the AT4047MP to higher end microphones, which of course there are plenty to choose from in this price range - many of which are superior to this one...