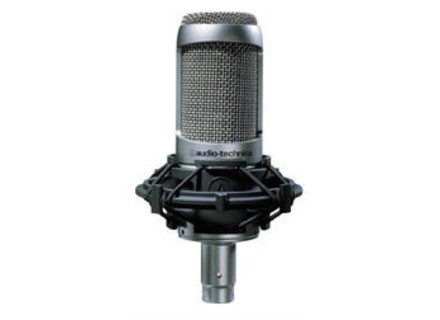 Audio-Technica AT3035
5
Primarily a singer, I've been playing guitar for about 10 years, been in a band (drummer!), and have continued to record and play with other musicians on a non-professional basis. My styles range from folk to hard rock, with heavy power-pop leanings -- Big Star, not Green Day.

Bought at Guitar Center on Sunset Blvd. in Los Angeles for $200. I needed a better microphone for acoustic guitars and vocals.

I can't afford higher-end mikes that cost $4000, and I am quite pleased with the sound I get from the AT3035. After acquiring it, I used it on an acoustic-guitar/vocal recording and was stunned at how much clearer the sound was compared with my old recordings. I also use it for film voice-over and ADR work and the mike yields pretty clean results even without a soundproofed room. When shopping for the microphone at Guitar Center, I tested this against a Nady, an MXR and an AKG Perception -- some of those were more expensive than the AT3035, some were less -- but the AT3035 was the winner by a landslide in terms of clarity and construction quality.

Nothing, really, except that the metal at the top of the microphone is a little soft and gets dented easily.

Very good. It's not too heavy, but feels sturdy enough. It also comes with its own shockmount and soft carrying case.

Getting this microphone completely changed the sound of my recordings. Suddenly my vocals began to sound much more professional, I could hear myself far better while recording and so I could also perform better. And the AT3035 also does fine recording acoustic guitars. For $200, it's a great piece of equipment.

Audio-Technica AT3035
4
Acquired this mic to primarily record vocals. Paid about 150 bucks on ebay.

The microphone has a really flat response, no extensive coloration, vocals sound clear. It does not pick up siblance, sometimes doesn't even need a pop filter. You can't beat the quality for the price.

The low-end sometimes needs to be turned up a little. Jangly sound when recording acoustic guitar.

Sturdy unit. I'm not afraid of damaging this mic...almost looks durable enough to take on tour.

Audio-Technica AT3035
4
I bought it for under $200 at Guitar Center. I bought it primarily for home recording vocals and accoustic guitar.

Very sturdy unit with excellent shockmount. The microphone fits the shockmount very well. No problem with vibrations. The unit has a hi-pass filter which is so good you can use the unit without a pop filter. With the hi-pass filter engaged, it gives good body to the voice without extensive coloration. Or, without the hi-pass filter it records top end presence really well, however you need the pop filter because its difficult to do away with the p's and s's (sibilance) otherwise. The unit also has a 10 db pad for recording really loud instruments. It requires phantom power.

The two switches for hi-pass and 10 db pad are a little on the cheesy side, indented and difficult to use. Your not likely to use the 10db pad switch much, but the hi-pass filter might be something to turn off and on depending on the effect your trying to achieve. The unit does not come with any other protection for the microphone other than the box, which is probably what you'd use to store the microphone when not in use. There's a small bag for the shockmount.

Basically, very well constructed and a very good unit for the price. Too bad the little plastic switches are a little cheesy but I guess there has to be some concessions to get a microphone of this quality for under $200.

Very good microphone. It will definitely do the job for you, and you will have a lot of fun with it, and it will definitely get the results your looking for in the home recording studio situation, unless you want to pay alot more.

cabdub's review (This content has been automatically translated from French)

Audio-Technica AT3035
4
What type of microphone?
I use it mainly for voice taken, but I took percussion, guitar, it is a bit passe partout

How long have you use it?
3 years in home studio and mobile studio. I have lots of stuff recorded with this mic. He never above. 250, one pays a micro worthy of the name. The Apex I had before saturais quickly and Alche after 18 months. The AT30-35 is ground and solid. both on percussion, guitars, voices, he takes everything well. Neutral, it does not color the sound. Hyperdirectionnel, he takes it before him, ideal for nomadic config.

Have you tried many other models before acqurir?
Apex 450, by one against the more than blah!

What is the particular feature you like best and least?
+ Happening everywhere, versatile, neutral.
- Lacking in harmonic.

With experience, you do again this choice?
Yes, we still need a versatile microphone.
Did you find this review helpful?yesno
»
Read the 10 user reviews on the Audio-Technica AT3035 »