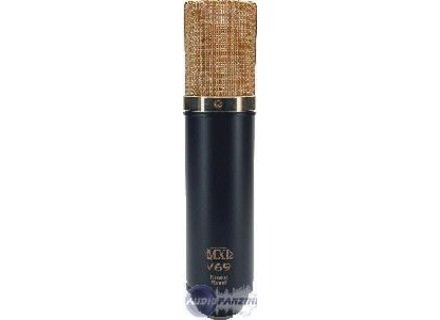 MXL V69
3
This line of mics from MXL I don't care for on vocals whatsoever. They have a real high mid sound. I don't like this mic for vocals. I have used it in my studio www.chrislieckstudios.com daily for room micing. It is fine as a room mic but not for vocals. If you have a female vocalist that has high mid range tones and or a head voice then this mic will not work for your needs. It even makes it worse when you try to compress the signal too much. I think that the bump at around 4K is rather annoying for recording what it is intended for vocals. Now it is reasonably price and does look good.

Good for room mic application. I do love it for room micing drums or right in front of the kick drum as a room mic. The high mid bump softens well for hard hitting drum sets for some reason. It almost has a room compressed sound that is not typical from most mics in this price range. I have used almost every MXL made and I really love there mics but it seems that each one has a particular sound and so you can't use this mic for toms or inner kick drums but rather room or a less present sound. I like the look of the mic and it is very well made. The boost in the high mid range does not make this a choice that I prefer for a female vocalist nor a high sounding male singer as when you add compression to the mic it sounds worse and more harsh. I think that the idea was to have a more sensitive and better looking version of the MXL 990 but I like the 990 a great deal better and it is less in price. If I were buying a mic under the $150 range I would look around on Ebay and find a pair of MXL 990 mics and use them as a pair and you would have two great, more flat mics to use on several other things aside from vocals.

Too much high mid to high boost for vocals.

Use this for room mic on drums it is great for that.

MXL V69
4
This is a tube condenser microphone which comes with its own power supply. The microphone is made by MXL, a lesser known company. It is definitely only really useful in a studio environment. If there is ambient noise in a recording space, this mic will pick it up, so really you should only use it if it's going to work well for you. Live shows are a no-no. This mic is definitely really versatile, but it's also incredibly fragile. It's not as fragile as a ribbon microphone but It's definitely no SM57 so be careful.

I think that for the price, this microphone is a really solid choice. It certainly is not going to hold up to an AKG N-1 or a Neumann U67, but it's also a fraction of the price of one of those mics. I recently did a "shootout", or comparison of this mic with the AKG N-1, and I found it to be relatively comparable to it. It was certainly brighter and had a harder high end, which is not always the best thing in a tube mic. This mic tends not to be as "warm" as the N-1 but it has a brighter high end, so it has its own advantages as well. However, certain vocalists actually sounded better with this than the N-1, mainly because they were not belting it out as much. I find that this mic is good on acoustic guitars, vocals, and even as a room mic for drums. I like it on lower stringed instruments like cello and viola, and to a SLIGHTLY lesser extent, violin. It's actually great on most instruments. While I am spoiled in the sense that I regularly get to use awesome mics like the previously mentioned tube mics, I feel like I would recommend this one because it's so much cheaper. If you can't afford one of those other ones, I would definitely get this one.

MXL V69
3
The MXL V69 is a large diaphragm tube condenser microphone that is made for use in the recording studio.  It comes with a case, the power supply, a shock mount, and the proper cable to plug this into the power supply.  It is definitely not meant for any other sort of use beyond recording as it is somewhat fragile and needs to be treated with care.

I've been using the MXL V69 for a little less than a year and while I wasn't expecting all that much from this mic, I'm not a big fan of the way this mic sounds.  While it is certainly cheap, I do think that it is a bit overpriced because it doesn't have a great sound quality in my opinion.  While of course tube condenser microphone for $300 USD sounds like a great deal, for me it isn't worth it because while it does sound okay, it doesn't sound like a $300 mic.  I've used it a number of times for vocals and while it does have a warmth to it that is heard in most tube mics, it lacks a certain clarity and is almost a bit too fat sounding.  I look for a mix of clarity and warmth in a tube mic and to me this really just has too much warmth.  While some might view this as a good thing, for me it clouds the picture and doesn't give you a true sound of what you are recording.  While this looks like an attractive option for home studio owners, I would recommend looking into other microphone even if they are not tube mics.  I know that it is cool to have a tube mic in the collection, but I would recommend getting a cheaper solid state condenser mic as there are pleantly that sound cleaner and are more useful than this one.  I would recommend trying this out if you are in the market for a tube condenser, but make sure to shop around to see what else is out there.

arnaud777's review (This content has been automatically translated from French)

MXL V69
5
Micro lamp, blah ... if the data sheet provided by the manufacturer on their site

super ... only problem, no dial pad or mitigation ... for me it's not a problem in itself, but I can imagine that one would have appreciated their presence. So I take off a point.

I've had a few weeks and as I was using a Shure SM58 ... There's a world of difference.

Lack of resources, I could not make comparisons with other microphones, but it made me look so good ... In addition, if you read the reviews in the press and on the Internet; one falls very rarely, if ever, in fact, negative opinions on ...

I would do if this choice? Only the future will tell really, but then I would say yes.

Did you find this review helpful?yesno
»
Read the 6 user reviews on the MXL V69 »