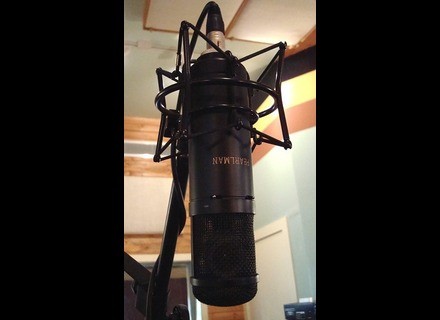 Pearlman Microphones TM-1
5
The Pearlman Microphones TM-1 is a tube condenser microphone that is modeled after the Neumann U 47. It has a large diaphragm and comes with it's own power supply since it is indeed a tube mic. It also comes with a shock mount, as special cable for it and a case. I wouldn't recommend using this outside of the recording studio at all, as it just isn't designed for that sort of use. The TM-1 comes with either a German or an American tube in it, with the German version being a bit more expensive. The version of the mic that I used was a German one.

While I don't think that the Pearlman Microphones TM-1 is a direct copy of the Neumann U 47, it's pretty close for sure. It has a very full sound quality and is perfect for recording thick sounding vocals and for a variety of other applications. While I've never had an opportunity to test out the TM-1 and a real U 47, I have used a U 47 before I don't believe that this sounded as good. However, it's really hard to tell since I used the U 47 a few years ago and used the TM-1 pretty recently ago. It also was in a different studio, so of course there are a lot of different factors at play here. However, I can say for sure that this is a great sounding microphone that is very reasonably priced when considering the sound. While it's still going to cost home studio owners a good amount of money for a single microphone, if you're a professional it definitely will seem like a much better deal. The main thing is that when you compare it to U 47, the TM-1 won't cost you nearly as much, as it's really just a fraction of the price. If you're a home studio owner looking for a killer microphone at the top of your signal chain, or a professional who wants a top tier tube condenser to add to the cabinet, the Pearlman TM-1 is worth checking out.