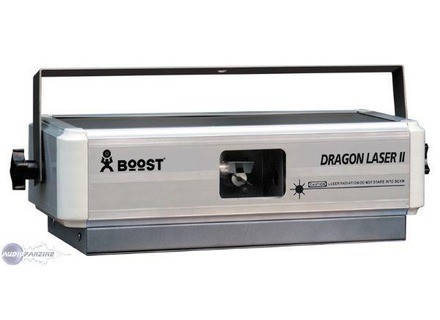 Radiums's review (This content has been automatically translated from French)

Boost Dragon Laser II
1
False data, but kidney beautiful exterior finish in the housing!
A diode laser 5mw greenish announced yet for 20ou 30mW.
build quality dreadful ...
citation test sonomag:
"Trying to keep the screws in the plate a few tenths of a millimeter, some summers have holes pierced properly centered, the wafer which supports the laser diode appears to have been cut with the teeth .."

Seen in demo, the radius diverges widely, can be 10mrad with a spot diameter of 5 cm to 5 m back! any laser product has been so bad in this respect there.
pittoyables performance, quality, appalling customer service non-existent ...
Mistrust: This applies to all lasers BOOST: they are green, red or black (when walking more sources).
The effects are lousy, they destroy the real-LASER SHOW.

Boost had better change their name, they do not seem to be ashamed to sell and have sold the stuff completely crap in sound and lighting for a long perriode. We all remember the BOOST to 300W to 50W crâment that point, but with an amp that gives BOOST said 2X300W 20W speakers are holding up but the quality of its crissarde geularde and the possible.
Anyway, it's a reputation boost abominable in every mind which the company does not appear to be ashamed ...?
Did you find this review helpful?yesno
»

Jojo071288's review (This content has been automatically translated from French)

Boost Dragon Laser II
3
I read your comment but she looks a little push ...
So exaggerated that it seems to me wrong ...
Did you find this review helpful?yesno
»

Other Boost lasers less than 500mW