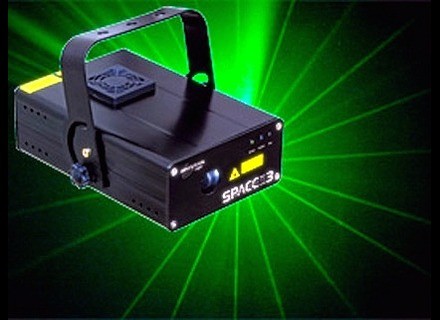 keke07's review (This content has been automatically translated from French)

JB Systems space 3 laser
5
I use this jewelry since about 2 months for 5-6 evening and I really think this little light effects is doing really well ....... of course we should not seek to make li form at 500 meters .. whatever ... it'll be slight .. but seeing! it consists of an on / off switch for the entire unit and another one key (two keys are delivered with) for the laser is controlled by him même.Il music, automatically, in channel dmx and another thing I think ....
In short this laser under 500mw is a limit to enter the big league! As the first laser that is a real pleasure for its owner, who does not Contans ^ PLER the number of form pre-register, and for those coming in the evening there is brief poverty reduction, small, powerful enough to be consistent and that asser fun ... plus it is very full amount

to buy (a little expensive but it has acha is worth! believe me!
Did you find this review helpful?yesno
»

coqleboss's review (This content has been automatically translated from French)

JB Systems space 3 laser
4
<strong>For how long have you been using it?

In recent months and has not truly served but I test many times.

I saw in operation 40 of the Laserlab starway.Je think they are not comparable because the starway is less geometric figures (many lines in all directions) while the space is figures such as circles, squared cross etc ... starway has a greater angle (40 degrees) and an LED 40 mw.Le Space 3 30 mw throws a smaller angle (20 degrees) so the sum in space 3 is brighter but smaller despite a less powerful LED

What is the specific feature you like best, the least?

The pros: The luminosity, the solid (metal casing) brief one feels the reliability. Lots of nice figures

The -: The tunnels are not really round tunnels as in other laser lammegamme starway that they seem less circular.

Very correct, in my opinion one of the best at these prices, a better performer or a green x 30.

With exprience, you do again this election?
Given the small angle, I think that would have 2 effects of the fire of God in slave master So if the property is still entatoui sur.Mais if it marchepluspeuttre ... To tell another change.</strong>
Did you find this review helpful?yesno
»