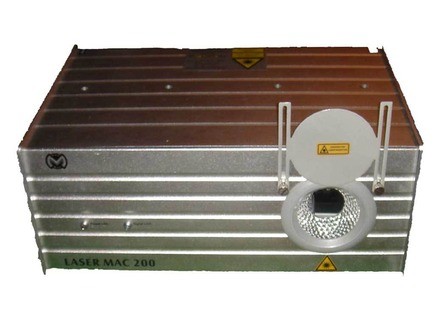 xchouchou's review (This content has been automatically translated from French)

Mac Mah Laser Mac 200
4
Very good buy I am satisfied despites the software a little complicated to understand at the beginning and when English is not exploitable on Windows.

The effects are impressive for the price of another laser pro in the same range.

I could fault the Scriptures but the figures and images has nothing wrong.

adequate clearance is requested, bedroom or garage is not at all suited to its use

advised for anyone wanting a small budget and a pro equipment
Did you find this review helpful?yesno
»

Mac Mah Laser Mac 200
In short, it's shit, always falls down.
made of zero, especially in writing.
Finally, for a room it can do and more.

biscotte's review (This content has been automatically translated from French)

Superb, I saw him shoot in broad daylight and store away I remained impressed by its power and its possibilities;
I wanted to buy a laser with an output of 1 watt at least for large rooms, I did not expect any such potatoes for only 200 mw ...
I'm running in demo mode (since not had time to familiarize myself with the supplied software) for the first year in a hall of 500 m², with a little smoke everyone fell for buttocks, the room was covered easily by the rays of beauty.

davitel's review (This content has been automatically translated from French)

Mac Mah Laser Mac 200
1
This is a joke? We must stop buying these effects grotesque! Talk about laser when you know what you speak. The sources are not stabilized Peltier (lifetime reduced by half, at best), the scanners are in fact common motuers step inccapble to graphics, the powers announced are false (one was measured at 250mW 90mW, product at Mac-Mah) lasers that are a rip off!! Do not buy these products especially not, check properly before you go and see the forums of lasers to understand what a laser ...... at least the product Mac Mah-are not.
Did you find this review helpful?yesno
»
Read the 6 user reviews on the Mac Mah Laser Mac 200 »