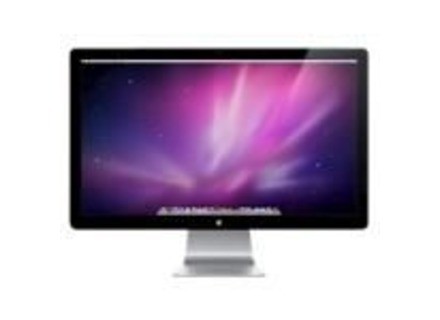 Cinema Display 27", LCD Monitor from Apple in the Display series.

Apple Cinema Display 27"
4
I am not a huge Apple fan but I give credit where credit is due. Their displays are some of the best on the market. They really have a different look to them. When you are using an Apple display it just feels different than a normal monitor. The construction of the display is pretty simple. It is a pretty thin design with a metal piece that holds it up. You can tilt it back and forth a little to adjust it. It comes with a a few USB ports along with the normal video cables ports. You can see why graphics editors pretty much only use Apple hard ware. These displays have such a crisp and vibrant image. The colors are deeper and darker and its like a high res HDTV. My normal monitors look good but they really dont compare to the displays Apple use. The picture is so sharp it is hard to discribe. It is not that good for gaming since it only has a 12ms response rate but games are not really the concern of most Apple users. There are a few cons to this monitor. You need an adapter to use it on a PC. It can have a lot of glare if you are working in an environment with a lot of lights. There is limited adjustment. I had to put a book under it to raise it to a comfortable level. It is also very expensive. You can get other 27 inch monitors for around 200 dollars while this Apple display costs 5 times as much. If you are looking for one of the absolute best monitors on the market and have the money to afford it there are not many monitors better than this one. Apple knows what they are doing when it comes to displays.
Did you find this review helpful?yesno
»

Apple Cinema Display 27"
5
Apple has finally revised their famous Cinema Display. While there are fewer sizes and less ports than the last one, the new monitor features a newer IPS panel and Apple’s Mini DisplayPort.

The monitor itself is very similar to the current generation iMac. It features that swooping back with the thin metal bracket to hold it up. There is no upwards/downwards adjustment with this, but you can tilt it to suit your needs. The monitor itself has three self-powered USB 2.0 ports, a display port and a power cable. Looks wise, it’s up there with the best of them.

The IPS panel that Apple is using is a great panel for those doing graphical work. The colors themselves are extremely true, even though the panel itself is a glossy panel. Some people complain that glossy is not the right way to go with design work, but as someone who has been working in the graphical and desktop publishing world for years, I find that the glossy panels are actually more true than the matte finish panels. A quick calibration can easily fix up any issues you may have with color mismatching when printing and designing.

The monitor only comes in 27’’ form, and I find that’s a pretty good size. I miss the huge 30’’ they used to offer, but I don’t miss the price point it came at. While this is still more expensive than most other IPS panels out there, it’s still not a bad deal considering what you get. The aspect ratio is a 16:9 ratio, which seems to be the new standards. More and more people are abandoning the 16:10 ratio, and I have a feeling that’s due to the HDTV market taking over. The more people get used to a standard format, the easier designing will be, so I see where they’re going with this.

If you have the money, I highly recommend picking up one of these monitors. However, if you can’t afford it, I don’t really blame you. While I’ve used these in the past, I personally use Samsung monitors.

Apple Cinema Display 27"
5
For almost a year, I am pleased to use this screen on my workstation.

I can finally display a session with lots of tracks and it's very comfortable.

The additional USB connectivity is also convenient to add his iLok keys or other devices quite useful.

No way, I would do this purchase.
Did you find this review helpful?yesno
»

Other categories in Computer Monitors