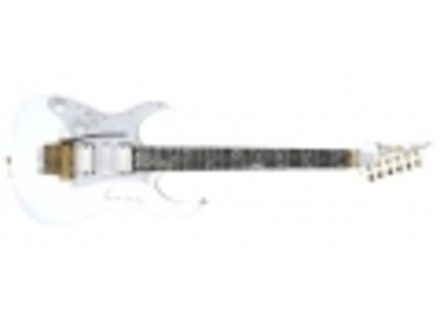 Nicotroidé's review (This content has been automatically translated from French)" A jewelry ..... left handed ..."

Ibanez JEM7VL Prestige
5
Made in Japan by the maker of the Team.J.Craft Ibanez.

24 freight with scalopage between 4 last frets.

Such a flat handle that easily allows all conceivable acrobatics with comfort.

Okay so there you have the "Vai", not the game either huh, that's another story!

A guitar with a very precise sound and rich enough harmonics, guitarists approximate abstain because if you play "sloppy" it means now.

Well, for starters you should know that this model it has been 15 years that I dream, so my opinion may not be the most impartial will be, but I know recognize if critical to do.

So we passed 15 years since I laid eyes on this legendary guitar and listened to Mr Vai play on, and now I've done mine.
Being left more (yes it was not won with all the models that are not manufactured in left-handed), I've never really been able to pay my models I wanted to because of lack version "left-handed" except this course.

Having already owned four other guitars starting to play more humble models (in order: Washburn KC30, Wasburn N2, Ibanez JEM555), I was able to evolve over the years in my game, my sound, so in model quality.

The JEM7 offers incomparable comfort play in the handle so flat that in almost like it is fragile, but when you see how Steve Vai "torture" his JEM, one quickly realizes that it is solid and good because when you are not going to shred dead hand!

The sound of microphones evolution is of course full of character, some critics of this model say otherwise but objectively, listening to the different configurations of microphones without knowing that it is a JEM, you will receive dignified tones of Gibson, Fender, and best guitars made for metal, I would say that the JEM has a very versatile range of sounds, which allows you to now the Blues to Rock, Jazz to Fusion to Metal ... etc, it collects everything!

Design side, then I would not be at all objective, for me it is the most beautiful guitar I've seen, the ubiquitous gilding appear a little kitsch for some but I think it gives a "valuable" character to instrument ..... my préééééciiiiiiieuuuuux!! ....... ahem ... sorry!
The tree of life is an aesthetic killing with abalone inlays, and the whiteness of the guitar makes it look "angelic" so that little out of devilishly sharp riffs and powerful, versatile ... I tell you .....

A more serious for vibrato edge pro enough known for its ability to keep the agreement even after a torture session, provided that it is perfectly set: tested and approved, it is not a legend.

The only downside of this criticism is the price (€ 2650 for a left Outlet model), it is of course justified when the choice of materials, microphones, and precious woods used in the manufacture of the JEM, which are the high-end, but me as a "pinailleur" I turned the guitar on all sides to detect the slightest imperfection and I noticed a few pinholes at the edges of the frets on the neck, they have been reported by others with the same model, and also the lack of thickness of the layer of paint in some places that hints at the striations of the wood on the body (as reported by other owners of Jem), as well I tell you it's nitpicking, but at this price it is right to have a perfectly exemplary finish, and although it is still fly high, it justifies my flat at the value for money, but it does not prevent the JEM to be in my opinion an exceptional guitar, on the contrary, because perfection is hard to achieve.

This guitar is all just as instrumental as a result sentimental, and yes, you can play metal and have feelings

.
I am amazed by the richness of harmonics that infuses the sound of melodies that you play, its handling is impeccable and she still exudes a certain charisma.

I am a left-handed guitarist filled, Ibanez thank you, thank you MR Vai.

Nico3D
Did you find this review helpful?yesno
»