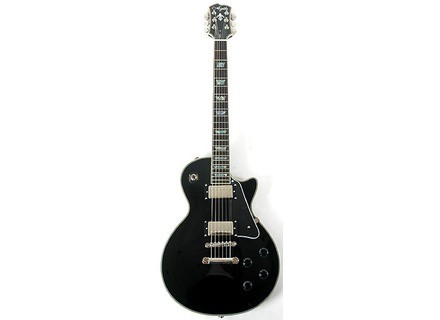 Agile AL-3000
4
I have used many different amps with this Agile guitar, keep in mind this one is a special edition just made one year with EMG 51/50 active pickups. Without any effects sounds great and with effects just gets even more power and great sounds. My friends have compared there Gibson Les Paul to it and say this plays better than the lower end Gibsons and on some cases equal to more expensive models. Did a blind fold test with a true Gibson guitarist and cold not pick which was which. This Agile guitar has been used for many different styles and genres and has performed very awesome. Clean, Crunch and distorted all with good out takes. The pros are sound, look and fell.
Cons
- are most guitarist never heard of them and won't even give it a try until they hear it.
Did you find this review helpful?yesno
»

Agile AL-3000
5
I was looking to purchase a specific Epiphone Les Paul left hand version and was told they only make them at certain times of the year. I started combing the internet for one when I stumbled across the Agile brand and read all the reviews I could find. Surprisingly almost anything I read on Agile or Rondo Music the US distributor was all Positive. I bought the AL3000 lefty for $360-Shipping was lightning fast!

It looks like a $2500 Gibson! the quality, fit, finish and sounds are amazing for the price. It is better constructed than my Epiphone Dot guitar. The pickups sound great, the action is superb and the unit needed very little tweaking on arrival.

It seems to be a bit heavier than my previous Gibson LP and I prefer the speed style tone/volume knobs.Thats about it, trivial I know but you can split hairs all day and not fing anything substantial to complain about. This ax should/could cost twice as much.

Ebony fretwork is perfect as is the cherry sunburst finish. The grovers alighn and action is smooth, lots of sustain and stays in tune perfectly. Binding is flawless and no glue bulges anywhere.
I would buy another of these in a heartbeat!

It is hard to believe the price of this guitar when you're used to paying thousands for the same qulaity in a Gibson.
The components and electronics are first rate and the sound is really great.

Absolutly EVERYTHING! From the construction to the choice of woods use. The finish is AWESOME, drop dead INSANELY beautiful. The pick-ups are great, no need to swap them out! The 3000 series pick-ups are supurb!

Nothing! Agiles are simply the best guitar for the money. They would be still be a steal at twice their price (which is why I now have 16 Agiles)

Same construction as a Standard Les Paul, except its made better and has a nicer flamed top than any basic Les Paul and costs about 1/10th the price! Frets are well dressed, no buzzing or dead spots of any kind! I have 2 of their 12 string models (a 2500 with a larger headstock/wider fretboard and tuners to accomodate for a twelver). This model beats ANY 12 string electric out there.

I've been playing/collecting guitars since 1975, I have A/B'd them against my wonderful collection of axes, including some late 60's Les Pauls, a 75 Paul (std) a 1980 Deluxe and a mid-80's Custom - the differences are so minimal its SCARY - these are simply a steal at twice their price, never mind what I'm paying for them now. I average about 3 Agiles a month, I want to get them all before they go up in price! Rondos sales staff is fantastic! Dave is a fantastic guy to deal with, a very cool young dude who goes out of his way to make his customers happy!

I have no idea how consistent the quality control is for these guitars, but this one is without imperfection anywhere. Smooth and not too thick finish, the sweetest looking deepish cherry red sunburst finish as you could find. Frets all are perfectly filed and finished on the ends, ebony fretboard is smooth and consistent from end to end. Hardware is all clean with smooth edges, pots work well and feel firm and substantive. I really could not be more pleased with the entire package and its fit and finish.

I am a big fan of P90s. Stock pickups are okay, but I knew ahead of time I was going to be replacing with Lindy Fralin P90s. Lindy and Lollar are just the best in my book. Lindy's seem a little more beefy. The tone I get is exactly what I wanted - like great single coils on steroids. Clear, articulate, no matter the volume but can wail and crunch like as good as any humbuckers.

I almost did not post a review because I really cringe when I read all the glowing reports of almost every guitar reviewed. I'll sound like a broken record here, I know. I have been playing 36 years and owned all manner of top guitars everyone would know if I listed them. Also some rather obscure but quite pricey one man shop guitars. This Korean made Agile AL3000 is just too good to be real. Add the Lindy Fralin replacement P90s and you have a beautiful looking, super easy playing, quality feeling, great sounding guitar, very well put together guitar. I love it. Really. If all of them are as good as his one, this has got to be the best value out there.
Did you find this review helpful?yesno
»
Read the 7 user reviews on the Agile AL-3000 »