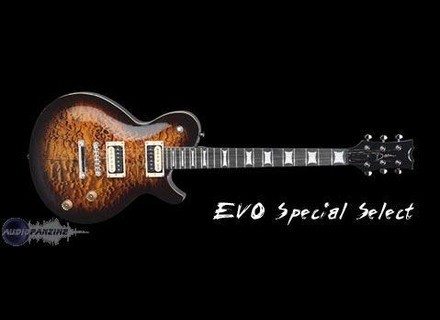 Dean Guitars Evo Special Select
5
purchased from Bracco Music via the internet for 500.00. I wouldn't buy from them again in a million years. They refused to replace the guitar when it arrived and I realized that there was a manufacturing defect. Instead, they kept referring me to Dean's customer service.

I won't go into the specs of the guitar because this has been described in detail in many other reviews. The guitar is beautiful in the Tiger Eye pattern. The construction quality was excellent except for one problem. It didn't have the coil tap pups as advertised. Everything else about the guitar is beautifully done. Once set up properly the action is like butter, soft and smooth. Once the coil taps were installed (by Dean who paid for shipping the guitar back and forth) there was an incredible array of sound despite the single tone control. This guitar rocks. It is more suited for playing rock than anything else although with the right combination of settings it sounds reaonably bluesy (I play mostly blues now, it seems to be a common theme for us older guys). I even play many classical tunes on the guitar because it is soooo easy to play. Despite its rock sound, it sounds great playing many genres of music so don't let that deter you. Despite the manufacturing error I'd give this guitar a 10! It looks, sounds, and plays like guitars twice its price.

There is nothing about the guitar that I don't like. If I have to nitpick I'd say that the guitar needs separate tone controls but it's not a major turn off for me. I'm not too impressed with Dean's customer service. I got a little bit of a run around for about a week while trying to get my guitar repaired. The customer service rep promised me 48 hour turn around on the repair but it took almost two weeks. Once the guitar was sent to them, they never did answer my emails or phone calls. Very frustrating but once the guitar came back and I had it set up, all was forgiven. DO NOT ORDER a guitar from Bracco Music in NY! Use one of the internet sites (if you can't find it locally) that has a satisfaction guaranteed return policy.

Other than the wrong pups, the quality is a 10! The Tiger Eye finish is beyond beautiful....it sounds awesome just sitting there idle! The bridge is well done and contrasts nicely with the dark finish, the finish is flawless, and the MOP inlays are fantastic. Solidly built. No other construction defects.....impressive for only $500.00

I'd definately buy this guitar again but I'd be more selective where I'd get it from but I was impatient. It looks like a million dollars and it plays like a dream. Now that the frustrating wait to get it repaired is over and I have this axe in my hands every day I wouldn't change a thing. It is more than worth the price, get one if you can find it! This guitar begs to be played. Just pray that you don't have a problem, problems will get rectified, it just may take a while. Get this guitar and you too can have flying fingers!

Dean Guitars Evo Special Select
5
$499.99 Music Loft, Durham NC 2001
I had been looking for a Les Paul style guitar but I didn't like the Epiphones and I wanted something that was better than average as far as workmanship.

I have always know of Dean guitars but never really looked into buying one because I tend to prefer the "classics" when it comes to design. I just happened to get linked to their web site and was blown away with some of there models, especially the EVO models. When I finally made it to the music loft in Durham to check out the EVO Special Select and some of the Dillions that they I was very impressed with the "in person" look of the guitar. I after I picked it up I liked it even more, not as heavy as a Epiphone which is one of my pet peeves of what they offer, but it wasn't to light either. As goldie-locks would say, "Just right"! (The body is just a bit thinner than a Epiphone). I then pugged it up to a Fender Cyber-Twin and hit a couple of notes. I must it sounded good even on a clean chanel it sounds great. What was really nice was that the neck is great, I didn't have to fit it at all. The neck felt much better than any other Les Paul Style I have ever played. That pretty much sold me on it.

There really isn't anything I "don't" like on this guitar. If I had to change something, I guess I would look at a String-Thru body if they ever made one, ofcourse that's not in line with the Les Paul Style but I like the sound. One other thing that I wish they would do a little better is the the process they use for the inlays. The inlays are awesome MOP, and look great except that some of the rosen/glue is noticeable around the inlay. It's black on Rosewood, so you have to look close to see it, but since they use such nice inlays, I can forgive that.

I shop a lot of guitar, pretty much all the time eyeing for my next one. More times I like bits and pieces from various makes/models, but this one gave me 4+ options that I had been looking for at an excellent price. I would recommend it to anyone. I did try different Dean models, including the ICON (to light weight for me), and the Cadillac (Nice but not what I was looking for).