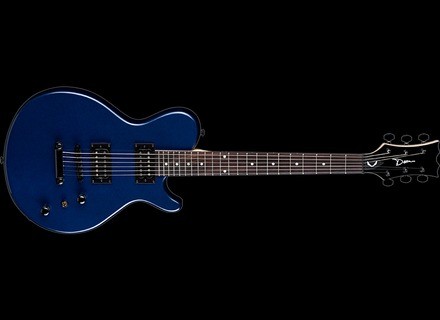 Dean Guitars Evo XM
4
I got it for $99 at Musician's Friend as a so I could learn to play an electric guitar. Wanted to start off with a "good for beginners, ok for pros" type guitar.

The main thing about this is the tone. The tone is what is advertised, and you get exactly that, rich tone. Plus the guitar was easy to set up. The dual humbuckers are decent. The guitar is light, so it's easy on the shoulders.

I just wish the guitar was available in a color other than natural mahogany. Plus, I had to clean out a lot of particle from the guitar, including the humbuckers. The particle was of a different material than the packing, so I can only imagine that when the guitar was put together it wasn't cleaned, or it was stored, unprotected, in a very dusty woodshop. The neck is a little too small for my hands, but that's my fault; I should've done more research.

The guitar, overall, is well made. The finish could've been a little better, but that's small potatoes. At the very first glance, the Evo XM might look like a toy. But when you mess with it and play it, you know you've got a quality guitar that was $99 probably because they didn't go all out on the tuning pegs and used Dean humbuckers instead of the fancier stuff.

I am happy that I made the purchase. In fact, last month I showed to a friend who knows how to play and was amazed at the sound that came out of that baby. So I know when I learn to play, and play well, I will still not regret getting the Evo XM.

Dean Guitars Evo XM
5
I have been playing accoustic guitars for years and recenlty decided that I wanted to try an electric and learn to play lead. I didn't want to invest $800 to find out that I stunk so I picked up this Dean EVO XM for $125 with a case. I figured that even it it only lasted a few months it would be worth it.

I was blown away by the finish of this guitar...it is beautiful. Right out of the box it was very playable. The guitar felt very solid. For a guitar in this price range the tone and adjustability was outstanding. I have tinkered with quite a few low end guitars and this one doesn't look or play like one. The weight is well balanced. With only a few setup issues (normal for any guitar) resolved, my friends love it too! They have the high dollar guitars and everytime they are at my home they grab my little Dean EVO XM and start ripping. They all say it's a blast to play.

The only thing I didn't like about the guitar was the tone and volume pots. They were the weak link. But $10 later that was resolved.

Overall this is a very solid guitar with great looks and excellent playability. I got far more than what I expected. This isn't the best playing guitar that I own but is by far the best value in my collection. I would reccomend this guitar to ANYONE from the beginner to the expert who needs a guitar to carry for practice.

IN IT'S PRICE RANGE!!!! The best guitar I have ever played hands down!!!!!! When I advance to the point where I need a little more, this one will get some upgrades--I will not buy another guitar!If you find this guitar anywhere, BUY IT! You will not be sorry.

Dean Guitars Evo XM
4
I bought this guitar at Musicians Friend. It is a very nice guitar. Nice finish, nice everything. I woudl receommend it for begginner to intermediate.

I don't like the 'sealed tuners' I also wish the finish was glossier.

Dean Guitars Evo XM
5
The Dean Evo XM was my first electric guitar. In hindsight, I'm really glad that I started off with it, because it played well, and it introduced me to humbuckers. The other option I was looking at was a Squier Affinity Strat, and I've only played one that played at a passable level.

It has a vol, and one tone control, with 2 humbucking pickups, a 3 way switch, and a tune-o-matic/stoptail bridge. The body is stained Basswood (looks like mahogany), and a maple neck with a rosewood board. The neck is meaty, but thinner than an LP neck.

This guitar sounded good to my beginner ears. It was all I needed to rock out Led Zeppelin, Pat Travers, and Mountain riffs. It's pretty light, and the neck joint is slim and tapered, so it helps fret access. I played this guitar through a Fender Frontman 15 G, and it makes every guitar sound ratty and thin, so that's not a useful way to rate the sound of this guitar. I remembered that there was little fret buzz, and it played pretty easy.

I mentioned the Fender Frontman 15 G I played it through, and at the time, I was just happy to have distortion. The neck pickup sounded fat with the tone knob rolled off, great for playing the leads to Mississippi Queen (the first lead lines I learned).

I'm glad that I was introduced to humbucking and a decent playing guitar that early in my development. I definitely think that this guitar helped me improve as a player, and it played and sounded good enough that I enjoyed playing the guitar, and stuck with it. It's a great starter instrument, and I'd recommend it any day over a Squire Strat or First Act guitar, which both seem like the go-to guitars for beginners just starting out.

I had noodled around with a cheapo $30 classical guitar before I bought the Dean, and I already loved playing the guitar. Once you plug in, the feeling is never the same again, and this guitar made me stick with it, and live out my rock n' roll fantasies, playing Snortin' Whiskey, Missisipi Queen, and Heartbreaker, standing on my coffee table. Although the guitar itself isn't great, my experience with it was.

Did you find this review helpful?yesno
»
Read the 6 user reviews on the Dean Guitars Evo XM »