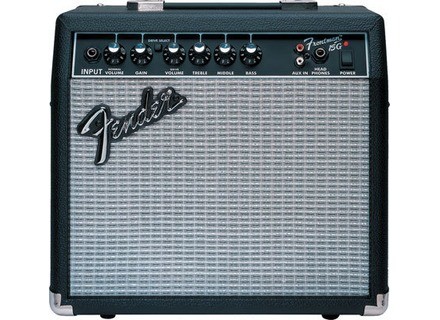 Fender FM 15G
5
Over 20 years as a musician. I play Hammond organ, Rhodes, Keyboards, assorted percussion, Violin and Sitar (fitted with humbucker pickups). Favourite bands include King Crimson, Pink Floyd, Dead Can Dance, Dunlavy, Deep Purple, Led Zepplin and Primus. Other than that I like classical and ethnic influences.

Small, classic fender styling, simple and sounds great for its size. Has the standard clean and distorted channels. The RCA connectors on the front are much more useful than the 1.25" phono Jacks found on most other units. Very easy for hooking up your CD player, PC and MP3 players.

Nothing, its great for what it does. Some other reviewers seem to be confusing this little practise amp with a 100W Mashall Stack. They seem a bit negative but forget that this is only a practise 15W amp. If you need an amp for band practise than this is not your unit. I use a 400W a side mosfet PA for those occasions. This unit is great for warmup or practise at home, not playing to a 20,000 person audience. And comparisons with all valve units is a bit unfair considering they are 10 times this price. Yes it is solid state technology but it is fab for what it does. AAAA++++

Very solid build, finish is classic Fender, front panel controls are much better than top or rear / top controls. The front grill is the grey silver shiny material standard on classic syle Fenders. No cutting out or signal issues. Mine was built in Indonesia. Quality control seems to be much better than the comparable Mashall's which are built in India. I have dealt with Indian manufactured goods for many years and would be very cautious of quality control there. They will send you great samples, you visit the factory and everything seems good until your $50,000 container arrives with something completely different than expected. yes I'm raving a bit but I got to make up my 200 words - what a pain !!!!!

Great little practrise amp. I think you will be happy as long as you are not expecting the sounic quality of a 100W all valve outfit. Small compact, simple to use without all the bells and whistles of its bigger brothers. If you have any effect units you won't need them on you amp anyway. This unit is not really big enough for band practise so don't be dissapointed when you are drowned out by power drums or driving bass lines. An excellent choice as a first amp. And it certainly makes my Sitar sound pretty good. Well done Fender, I think it deserves a 10 out of 10

The distortion is cheazy as hell and gives me headaches. The clean channel is mediocre at best and crackles at higher volumes. The handle fell off. The control panel is caving in.

This amp has been thrown down a stair case and came out just like it was before. Although for no apparent reason the handle came off and control panel caved in before that.

Don't buy it, there are better amps in this price range.

This thing has pretty cool distorion, good for metal I think, pretty sizzly. EQ does an okay job, the bass control is nice for getting sum of that cool palm muting cruch.
Its pretty small and light; easy to carry. On the subject of transport, it is really quite sturdy. I've dropped it, smacked it, tipped it over, and not even a single ding. Last but not least, this friggan loud, for a practice amp. I used a different one(a friends amp) in a punk band, where we did some Green Day and Nirvana covers. We had 2 other guitarists, a bassist, who we ran thru the PA, and 2 drummers, though only 1 played at a time. I played lead, so I gotta turn up the loudest, and I was cutting thru the drums at 6-7. In my latest band, I've been playing thru a BOSS HM-1, so my dist sounds similar to the other guitarist's. I crank the clean up to 8-9 cuz we like it loud.

Just minor annoyances:
The nut holding the Input jack steady is plastic, and tends to work its way off.

Once you turn up to 10, the sound goes down the tubes, but 9 is almost as loud, so its not really a problem.

There is a volume jump when turning the clean or drive volume up. As you turn from 1-2 it goes from quiet to LOUD all of a sudden. You can fine tune it, but it takes some fine motor skills...I dont play that soft anyway, Its an AMP, so it doesnt really bug me.

As I said in the "likes", its quite durable. The handle is nice too.

Kool little amp. Good clean channel, decent dist. Pretty cheap if ya buy online. It doesn't really stand out from the hordes of little practice amps, but its not worse than any. It would prolly be better to buy the 15R model, it has reverb. But, hey, its a Fender, its pretty kool.

I really like how if u change the knobs abit you get the perfect sound. If u want a clean channel that sounds exactly like ur guitar does with an amp then change it to: Treble: 9 or 10, Middle: 6, Bass: 3. I just bought a Line 6 Spider 2 and I use the Frontman for vocals now, and it sounds great.

The distortion isnt very good. I bought a BOSS pedal which really helped. Also, if u put to much bass or middle it sounds like garbage. It's suprisingly heavy for something that small, and has a problem with really loud clean channels.

It's built really well. I've dropped it and its never broken. The mesh outside the speaker is pretty rad, with all the sparkly things.

This review was originally published on http://www.musicgearreview.com
Did you find this review helpful?yesno
»
Read the 19 user reviews on the Fender FM 15G »