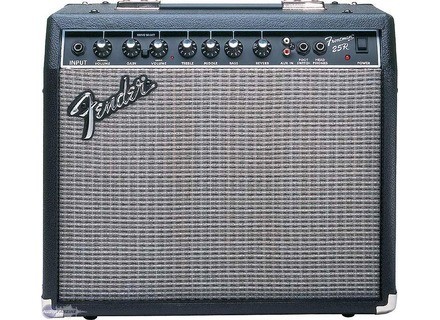 Fender FM 25R
5
This is an older 90's Mexican Assembled Amplifier. 25 watts rms, 10' stock speaker, clean and overdrive channels. Black Metal Grill. Attached 3 prong power cable. Solid State.
I've been an active gig-playing musician for over 48 years. Although I gig Traditional Country with a Tel Am Std, I play a variety of music at home.

I bought this amp recently on CraigsList, after buying our son a new Indonisian Frontman 25R several years ago. I was so impressed by his 25R, that I had to get one for myself just for practicing at home. I paid $40 on Craigslist for mine and am just as impressed with this one as I am with our son's newer version.

I don't use the overdrive channel, so I cannot comment on it. But, the lead channel is full and articulate. Very nice sounding. Nice high, mids and impressive lows.The reverb sounds good and the amp itself seems very solid and well-built. This is a very versatile little amp, that is unquestionably Fender in sound and build.

Nothing negative to proclaim about this amp. It is everything good I expected and more in most areas.

As I said before, it is built well, and appears no shortcuts were taken, given the amp is what it is. Don't expect it to be a Vibro King and you won't be disappointed.The fit and finish represent a very well-designed little amp.

The bottom line is this; It has the dynamics you would expect from a Fender and ample power for home practice use and possibly small rehearsal spaces and coffee house-type gigs. Given the nature of so many players these days to bring small, under-powered amps to gigs, only to mic them thru a larger sound system, you won't find this amp as a stand-alone in anyone's concert backline. But, it will hold its own in the right environment. Enjoy!

Fender FM 25R
4
I have been playing the bass (Fender custom P-Bass with a Jazz neck) for about 15 years and decided to make the jump to electric guitar. I bought this amp along with a Fender MIM Strat w/ direct mount p/u I have played (the Bass) in a few bands and done some studio work.

I bought this amp to complement a MIM limited run Strat with direct mount pickups. I wanted the genuine Fender sound without investing a lot of money. This amp is great for my purposes (learning the 6 string electric) If you're looking for something to make your neighbors ears bleed, keep looking, but if you're looking for something to jam around the house or mic through a PA at a gig (and dont havve hundreds of dollars to spend

this could be the amp for you. I have been playing around with ir for about a week and get a good variety of sounds out of it with my strat, by playing with all of the knobs and buttons. The clean channel provides a range of sounds from surf to twangy country tones, while the drive channel gives a fair variety of rock sounds from vintage rock to metal. With the built in reverb function, I don't see the need to invest in any effects in the near future.

Like I said it won't make the neighbors ears bleed, but it is loud enough to get me in trouble with the wife.

The construction is light weight and extremely portable. The Quality is as good or exceeding the price range, as far as sound goes, and it boasts a five year warranty according to the tag that came on it. i have not had the opportunity to test Fenders warranty policy ( a testament in it's own right), but a five year warranty on an amp in t his price range is impressive to me.

I recommend this amp to anyone that is a beginner, broke, or just needs a light, substantial, and portable amp for practice. It is even an acceptable giging amp if your band has a substantial PA to mic through. The fender sound at a cheap price.

Bought it at Sam Goody for I think $130. Prior to this amp I have been using a little Kustom 10w, so I wanted something a little more powerful.

Very nice design, and nice looking. The overdrive is very nice. I use it with a Squire and it makes the guitar sound much better, especially for playing heavier stuff. The control knobs and inputs are very nice as well.

The only small probly I have noticed is where the cord connects to the back of the unit. Its a removable cord, and I've noticed a few times my cord came a little loose. Not a huge deal though. Also, a footswitch would have been nice as well.

Nice construction. Pretty heavy duty and beautiful classic look. The only small drawback I mentioned is the cord connection, but I doubt this is an issue on all the models.

This amp is great for a beginner or practice amp, especially someone with a cheaper guitar. It will give you great sound and gets pretty loud. This might even be suitable for small gigs, and house parties, etc. This is a great value especially for carrying the Fender name.

Fender FM 25R
5
I purchased the amplifier new from Guitar Center for $139.99 plus tax. I purchased the amp mostly because of the price and the reputation of the Fender name. I also like the fact that it did not have built in effects because I already own a multi-effects pedal from Digitech. I just wanted a stripped down amp with great sound.

The size is perfect...small enough to be portable and large enough to rattle the windows. It has great overall tone and the drive channel works well for most types of rock or electric blues. With some tweaking the clean channel has great sound as well. For the most part I don't even use my effects pedal through the amp because I like the sound quality it provides by itself. The reverb feature is great as well.

The clean channel seems to have a lot more gain to it than the drive channel. I find that I have to turn down the volume from the guitar when on this channel. I also noticed a lot of white noise (hissing) when I connected my effects pedal to this channel. If I switch to the drive channel and turn the gain down the problem is not there. This can all be fixed with some simple adjustments of the amp and pedal EQ controls.

I like the placement of the knobs and switches. The unit did not come with a foot-switch, but I was able to construct one from parts available at Radio Shack for less than $8 (I'm just too cheap to spend $20 on one.) The speaker provides great sound. The only sound issue I found is that when played at higher volumes the front grill seems to rattle a bit (but so does everything else in the house).

Bottom Line: If you are a professional this would make a great practice amp. Probably not great for a gig. If you are like me, playing concerts for your wife and 2 year old at home, I would highly recommend this amp. It has plenty of punch for your home and other small gigs. If you want portable and powerful you'll find it in this amp.

This review was originally published on http://www.musicgearreview.com
Did you find this review helpful?yesno
»
Read the 24 user reviews on the Fender FM 25R »