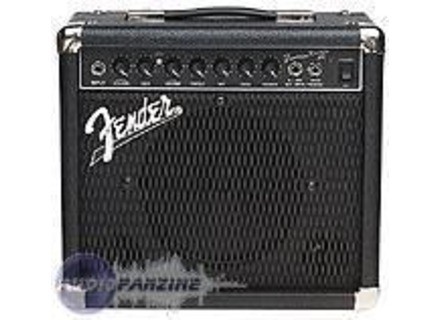 Fender FM 15R
5
I buy it because I need one small but good amplifier quickly.

Basically the sound, it sound very loud and good to be an 15 watts amplifier. I recommend to everyone that need something good. It have an excelent overdrive with a clear reverb effect. The clean channell sounds to good so playing blues never have being a problem to me.

Sometimes I dont feel the reverb, and when the ampli is hitten by something it sounds cool! but that sound dont convince me.

It have a nice construction.

It is a good amplifier for anyone who is begginig and it sounds pretty fuckin good.

This is a great little amp. Looks good, and sounds good. Has an overdrive channel that is fun to fool around with.

Indonesia model: The black vinyl covering has the same texture as my vintage Fender Amp, and the bright white lettering on the black face looks like the great too.

China model: The black vinyl is smoother, and the white lettering is more like grey lettering. So the China model doesn't look as "classic" as the Indonesia model.

Indonesia model: Seems to pickup more hum and radio frequency interference. This is especially true when using the reverb. In fact, I can't even use the reverb because of the extra noise.

I pulled off the back covers on both, and notice the China reverb unit looks more like my old Princton Reverb unit. Solid. The Indonisia model is in clear plastic, and looks cheap. The China unit uses "chokes" on the wires to minimize RFI, but the Indonisia model does not use ANY chokes.

Both models are great little amps for fooling around without making too much racket. The Indonisian model looks better, in my opinion, but the China model sounds better because it doesn't pick up any radio frequency interference. Both seem to have some punch to them that is impressive for such a small amp.

Fender FM 15R
1
came in a budget pack with a quality Bulletstrat made by fender squier. Paid £200 for both.

Umm.. I quite like the red light specially in the dark.. umm i look the old look.. I also like the crappy quality.. specially the clean sound. Sounds kinda distorted..

Ok... First its shit..
also.. the clean sound.. is kinda crap...
the overdrive.. is kinda crappy and always has a buzzing noise when loud.. umm reverb sucks.. when you put it half way it starts to make the most annoying ringing sound..
so.. basically the worst amp I've owned. I mean I've got like 10 amps, and if it were my first amp I'd probably think."yeah this things kool".. but it sucks so there.

Well its made by fender.. yeah.. and kit sucks cos its color is gay and its heavy for what it is.. what a piece of shit.
I feel sorry for all those idiots who have it and think its good... get a marshall.

It sucks.. Don't even consider it or think about it..

Fender FM 15R
4
I acquired this unit from a Sam Ash store, it was actually a gift to me. I was just started to play guitar, and I needed a decent amp to learn on.

This unit serves its purpose as a practice amp. Its got all of the essential functions on it, plus reverb. The sound is pretty good also. It features 2 channels, distorted and clean

Very nicely built, strong design. However, my input seemed to have chipped off somewhat.

If you are starting guitar, and you want a quality amp to practice on, this is beyond perfect. If you want a gigging amp, get a larger amp.

This review was originally published on http://www.musicgearreview.com
Did you find this review helpful?yesno
»
Read the 31 user reviews on the Fender FM 15R »