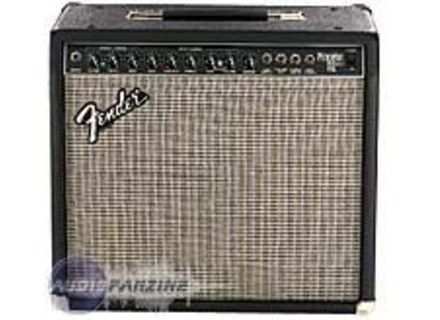 Princeton 112 Plus, Solid-State Combo Guitar Amp from Fender in the Princeton series.

Fender Princeton 112 Plus
5
I needed a backup amp and thought about a basic solid-state amp that wasn't heavy and fitted in my car's trunk.
I went for this 1996 solid-state Fender Princeton 112+, made in USA, rated at 65 watts, with a 12" speaker, and weighing 31 lbs, which has perfect looks for its age.
In terms of controls, it features two channels with separate EQ, reverb (not amazing, but correct), FX loop, and headphones output on the front panel. Nothing other than the usual.

The clean channel comes originally with a reverse log pot for the volume, so the volume increases quite a bit from 0 to 1.
Hyper-clean, well-defined sound, pleasant without the need to spend much time with it.
I expected worse from the drive channel because I had already tried other solid-state Fenders (FM65, RocPro 100, for example), and it was obvious to me that it isn't the brand's main strength. Well, it's progressive and useful thanks to the contour control.

I have a Strat and play '50s Rock 'n' Roll.
My amp is a 12-watt, class A Fender Champ 12 with a 6L6GC, mounted with the Torrès kit and I'm really satisfied with it.
The Princeton 112+ comes very close in terms of clean sound, with colder dynamics, obviously, but perfectly usable for my music style: The sound is typical Fender, meaning crystalline and well-defined.
I use the drive channel as a clean boost with the gain set to minimum, and I have added a Joyo F14 American for the crunch.
The amp works perfectly with pedals.

I bought it two months ago and it was an excellent surprise: A typical Fender with two channels, light and powerful.
I changed the volume pot of the clean channel with a log pot and the amp has become even better.
It's a real delight to plug in my Strat live with the amp's reverb. It's evident that it's far from the dynamics a tube amps has, but the sound isn't sterile at all, like with some other amps in the same category. I would definitely buy it again given its value for money.
Did you find this review helpful?yesno
»

The unit is pleasingly compact and light. It has ample power for a 65 watt amp.

I am not happy with the gain channel. The distortion is overbearing and takes away from the quality and uniqueness of sound from one guitar to another. I also find the reverb to be rather noisy.

No qualms with construction or components.

My previous amps have been Peavey. In hindsight I probably would have shopped for a Peavey again.

Fender Princeton 112 Plus
4
60 watts solid-state amp (although I'd say it delivers more), one 1/4" jack input.
4 other connections: 1 for a footswitch, 1 preamp out, 1 power amp in and headphones.
Two channels: clean and overdrive, each with treble/bass and volume controls, plus contour and gain for the second channel. A reverb button that works for both channels. It's a pity that it doesn't have a control for the mids, but we'll forgive it for that.
Knobs a bit cheap...

Very easy to understand, no need for a manual, I really like the contour control that provides us with a good palette of different sounds!

I recognize the clean Fender sound...Just for that I love it. And besides, you shouldn't use this amp for what it isn't meant to be used for: this distortion was not made for metal, but it really knows its trade when it comes to blues/rock/grunge! I use it with both single-coils and humbuckers and it responds fine, no problems in that sense.

I spotted it at a secondhand shop some time ago and I just bought if for $260. I've seen it on mail-order shops for $350, so it was a good deal!
Its main advantage is the Fender clean sound. I think I can recommend this product without hesitation.

- Very easy to use, you know right away what to do without the need for a user guide for basic traditional usage.
- In terms of sound, I use 98% of the times the clean channel: I was thrilled to quickly find a basic sound that suits me perfectly. I only use the (effective) controls to adjust this sound depending on the situation (place of the performance, new members in the band...).
- In terms of gain: I use it only 2% of my time, I admit that I haven't been able to find a sound that pleases me. I find the settings too "clichéd." It really lacks a mids control. The contour control allows you to very easily work with colors ranging from very fat heavy metal sounds to acid/metallic distortions from the '70s with a gain setting - transistor - that goes from crunch to "too" distorted.
- The reverb: effective and reasonable up to the 3 mark (from 10). Very nice color in my opinion and OK at 2!

Apart from that, the amp has a lot of presence and it is fine for a solid-sate amp, the difference with a tube amp are the dynamics.
I use it as follows: a guitar that goes through a multi-effects and then to the clean channel
My trick: the settings are not progressive. I use a volume pedal that makes the use of the amp much simpler. I have never noticed huge level differences (dynamics, harmonics or reproduction) with the control at 2 with and without the pedal 1/2 or 1/4 of the way up.
The mark I give it refers to the quality of the clean channel!!!!

- I love the clean channel, which is THE foundations of my sound and that I haven't found in any other solid-state amp. Long live the 12'' speaker: warmth and ease of use.
- See above for the sound according to the settings.

- Bought in December 1996, I've used it on average 10 hours per week ever since.
- I haven't found a similar sound from a solid-state amp with these dimensions, power and price!!
- I love the clean channel: I can't say it enough!!
- It has never broken down, no need to even change a single jack, nothing!!! It's the best.
- Quite easy to transport (less than 44 lbs/20 kg I think): on the subway... easy to fit in a car.
- It's great at home, but it might be somewhat limited for concerts!!

Value for money: in 1996 it was an amazing value for money. For that price, I think I would still go for it today.
Would I change it? I've thought about it, but changing to a tube amp to get more character and options (2 speakers, a reverb, an effects loop) is a real investment: I would pay dearly the difference given the advantages it would mean to me.
The overall mark is based on the use I give it, considering it's a solid-state amp with less than 100 W!
Did you find this review helpful?yesno
»
Read the 5 user reviews on the Fender Princeton 112 Plus »