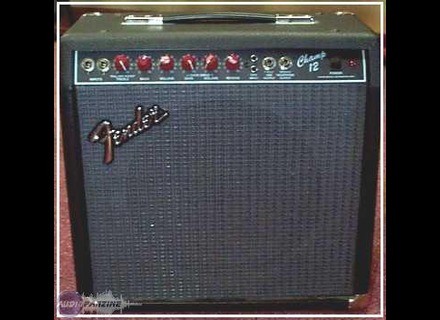 strat'man's review (This content has been automatically translated from French)

Fender Champ 12
5
HP 12 "Fender Special Design
Amplification in a 6L6
2 in 7025 preamp (eq 12AX7A)
Output power: approx 10-12 watts
Spring Reverb
2 channels (clean and overdrive)
The Treble control (acute) also serves as Boost if shoots ... very effective!
Enter to MP3, cd ...
Line out, headphone
The amp weighs about 10-11 kg transportable very short ...
It is a little bigger than my "ex AC4C1" against which I traded ...
Both say immediately I do not regret the exchange!

Very simple amp but will not suit everyone, unless you completely change ... but in this case it is better to buy something else ....
The clean channel is very usable even in an apartment, I can even push the amp thoroughly with hp Eminence makes 100db (it belongs to).
I took this amp for its clean channel, not the overdrive that is unmanageable if you want to play at a reasonable volume, it's all or nothing ... I had a 1995 Fender performer 1000 that also responded well, no escalation volume pots .... shame! (Can be a simple change of potentiometer greatly change that ...). Anyway I wanted a Fender for clean channel ... so the use is simple ... (note the Treble Boost is very active, with a beautiful sound in the midrange color -acute).
I note quite low here because the overdrive is little or no damage .... exploitable reasonable volume, but there are also opportunities to change that ..

So initially, the date of the exchange against my little vox AC4C1 (very good amp but also sticks better to humbuckers that simple ...), in short the AC4C1 a great dynamic ... and comparing the two amps, Fender was very "bassy" and with little dynamic in comparison ... But to have had a lot of amps and have changed a bit (simply), I realized that was the hp problem ...
So I'm sharing, I go home and I put a Eminence Legend V128 that I already had ... And then the change is radical!
Finished sound a little "soft" without much definition, without much dynamic .... the Eminence V12 is a clone of the Celestion V30 but less "harsh" as our friends say "Ricans" ... it is a hp not loaded bass but more than enough, it has good mid-high but not in the manner of a jensen, not too sharp either ...
In short, the clean sound is really excellent now the reverb I use very little on my amp but it is more than enough, I do not play surf music, for me the reverb and effects must be discreet, not overbearing .. . (I play mainly blues, rock, funk, soul, reggae)
So this amp matches my expectations for the beautiful clean Fender, ok changing the hp ... but the investment opportunity of a good hp does not ruin either ...
on the other hand I'm surprised the previous review that talks about a lack of bass amp ...! Instead it is so loaded with bass that I can paste it in hp which has less and is more "stiff"

I have this amp for a week, I had a lot of amps, large and small, tubes and transistors in small lamps all I had: Vox AC4TV and AC4C1, Marshall Class 5, Fender super field Champion 600 Gretsch G5222, Laney LC15R, CUB8, Ampeg gvt5 ... in short, I am not my first amp and frankly the "small" field 12 is a really good amp ...
Pay no attention to the bad reviews of people who choose this amp hoping to play metal, this amp is to be taken if one wants to clear her ... or you could put a little green pedal if you want to overdrive SRV ... I think the best is to try keeping in mind that the amp really deserves a better hp than the original ....
If you want a beautiful clear his Fender Champ 12 ... but you will plan the upgrade hp!

I think I will test soon a Jensen hp or Weber ... I will certainly update my review ...

lse's review (This content has been automatically translated from French)

- Clear Channel trs well
- Canal Satur .. Fender is the .. better to use the pedals with a clear
- Reverb: trs folkloric

I use it for 4 years, it's a great amp for playing at home.
It is found that secondhand (no longer manufactured for 10 years) around 200/250 euros
If used for what it is that an amp gnial