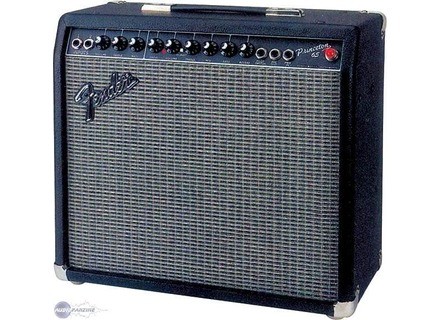 Fender Princeton 65
5
i generally bought my gear for personal use.

Started with a strat knock off and a Peavy amp .Both nasty but get what you pay for .

I like many types of musics rock ,pop etc
I ended up walking into the RockIn Guitars Mt Lawley Perth West Australia

picked up something a little different from a marshal ,ended up with the Princeton 65 .Amp was pretty steep around $1000 AUS.After testing it it sounded so good i didnt bother looking at the Marshals .
Anyhow this thing is a great amp.there is no way i have ever gone beyond volume 3 it is so loud and clean though .This thing packs a hell of a punch .I play at home usually on level 1.5 or 2-2.5 if there's a thunderstorm or something loud enough to mask the noise or the neighbours will have me for it which is way loud enough .It's incredibly loud and controlled and capable of anything you throw at it pity it didnt go to 11 though (spinal tap joke)

The treble,mid and bass are nice and clean enough for me .Reverb is really nice For something that is 19 years old now and never complained once i think i got a good quality amp .
The control knobs are capable of being broken which i have done on one of them.But the controllers have never broken .
The one thing i wish it had was a headphone jack ,so you can practice in peace .
Distortion is great ,but not absolutely perfect ,cant complain though it still sounds great .My jack plugs need a clean which i have to get to one day ,it gets dusty down my way and they can be a bit noisy with a slight move of the new chord .
When people say these amps are loud ,they actually mean they will permanently screw your hearing up if you over use the volume too often ,its that kind of loud they are talking about.but its a clean loud low distortion which allows you to become reckless at times.I have never had it over 5 by the way and that was just to see what it was like ,it was just over the top ,my dog shit himself i didnt see him for the next half hour .I wouldnt do that again .I am very happy with it though .if i got another amp it would be great to just have something with a different character ,different tones for a bit of fun if i felt like spending the money.I have a gibson epiphone and it sounds great through this,also the ibanez RG470 oddly sounds good as well as i would have expected it to be more suited to a marshal my take only..I dont need to upgrade anymore for what i do though.Its a great amp..

Fender Princeton 65
5
I play in a power pop covers band in the UK (The Fadeouts) I got this amp as a backup to my incredibly heavy Mesa Boogie Single Rectoverb 60, we play 10CC/Pilot/Be Bop Deluxe and much more besides (Lovin' Spoonful/Blur/Squeeze/Gigilo Aunts/Kinks)

I have used this amp live and I can honestly say it has exceeded my expectations, the guitars I use with it, untreated other than echo are a Gibson Les Paul Studio and a Fender USA Strat, the clean channel is everything you would expect from a Fender, clear and warm, the revelation to me was this is the only Fender Amp I have played that has a great overdrive channel, it really took me by surprise, while my Mesa has a beautiful sound, the Princeton has a lot of middle that makes it cut through the mix, it's bass is very good too.

I also play a Rickenbacker 660/12 with a compressor and 7 band graphic through the clean channel, it took the guitar to another dimension that the Mesa could only dream of.

I have seen a lot of people complaining about a Telecaster suffering from too much treble after volume 5 with this amp, I am not sure what the state of these peoples hearing is but I have never needed to play over volume 3 on this amp, maybe they were playing the Hollywood Bowl !!!! any fool knows a Tele is treble heavy so turn down the treble on the amp.

There are issues with the tone/volume pots being directly connected to the PCB, if the amp has been mistreated they will be loose, no need to worry about this too much, they can either be reconnected or an expert can hard wire a pot for you, but make sure you get it at a reduced price to compensate for this work.

The pros are it is a brilliant amp that is light in weight and easy to set up tonally,plus once you have set up both channels you do not have to make many changes when playing live.

The cons are while it is a durable amp and works even if you don't fix the pot problems mentioned, you do have to treat it with respect and take care of it.

I can only say with the guitars I have used with it I didn't believe I was playing through a solid state amp, it is not like the more modern day budget Fender amps which are generally all power and no finesse, this one really does have a classy, distinctive and powerful sound, I love it and my Mesa has become my backup.........this little amp is that good.

Fender Princeton 65
4
The transistor Princeton 65 is 65 watts with 2-Clean Inputs; Vol, Treble and Bass the Drive Input (#2 with drive button engaged) makes it dirty with Drive, Vol, Treble, Mid, Bass, REVB and there also are PRE-OUT, PWR-IN and Foot switch for add-on options.

This is a guitar amp so it is bright (very forward). The really nice thing is the 12- inch spk (vital to the tone), the bottom end is solid at these settings and the signal to noise was acceptable for the pre-amp circuit. On the amp output side; little line-noise that is typical of this amp but diminishes with volume of course (total pwr is 65 watts)

The 12-inch is a best speaker all around and can really expand its useful range when paired with better cabinet designs.

Got the Princeton 65 (PR403) as I was put-off by all the hype-crap of over-priced designer boom-boxes (like Beats) and needed a quick amp for my keyboard. Now before you guitarist begin to whine, allow me to validate why you should read the review. As a longtime studio/live, sound engineer, the objective was to test (using Neutrik analyzers) how clean, how loud and how sweet I could get this to be a top-performer in its price class.

Great Music Amplification in any venue rest on thee main points;
- Amp’s ability for clean reproduction (signal must be clean first, in order to accuracy control tone color (clean before adding the dirt).
- Tone processing should be clean, serving its duty without adding junk, give control when you want the dirt and be open to optional outboard gear (EQ, REV, EFX, etc).
- Speaker tone, type and size must meet its intended use and do it accuracy (it is the last link where signal turns into sound for the human ear.

With that - I was surprised how clean it delivered. Sparing all the techie details I’ll simplify it this way: with Clean Input; Vol. 5, Treble 1 (yes one), Bass 2.7 (or 3) is a good start point (varies slightly with each unit). Not really a guitar player so tested by playing of Eric Johnson’s ‘Missing Key’ (Seven Worlds) or Michael Landau, ‘Roodis Tones’ from Tales From the Bulge (to give credit to two lesser known mainstream artists) with iPod connected using lossless HD MP4’s, and your barbeque or house party will rock like the bands playing in the yard. There is a little line-noise that is typical of this amp but diminishes with volume of course (on that mater, I’d go with Hartke but of more cost).

The PR403 also Drive Inputs (making it dirty) with Drive, Vol, Treble, Mid, Bass, REVB and a PRE-OUT, PWR-IN and Foot switch for add-on options. This is a guitar amp so it is bright (very forward) and why only a 1-percent Treble in my case. The really nice thing is the 12 inch spk (vital to the tone), the bottom end is solid at these settings and the signal to noise was acceptable (total pwr is 65 watts)

So hope this is helpful on all counts, whether looking for a reasonable guitar amp or a really rockin’ portable amplified player.
Did you find this review helpful?yesno
»

Took about 30 minutes to get the tone I wanted.

I couldn't be happier for the price I paid ($100 USD). Got it used from some guy on craigslist. The clean channel on this amp has some of the best tone I've heard come out of a solid state amp. The overdrive leaves a little to be desired, but can be fixed with a pedal of your choosing. The spring reverb has that classic Fender sound. Don't be fooled by the size' this little thing is LOUD. I live in an apartment and had the volume between 1 & 2 and thought I was gonna get a noise complaint. It took me about 30 minutes to set it up for the tones I wanted. Great amp for the money!

Did you find this review helpful?yesno
»
Read the 16 user reviews on the Fender Princeton 65 »