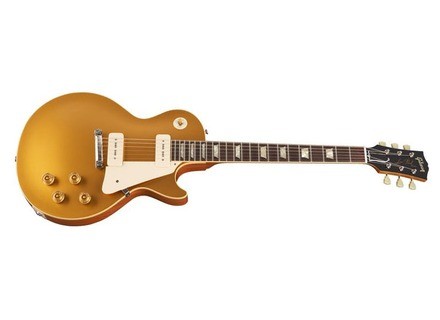 Gibson 1955 Les Paul Goldtop Wraptail
4
This is one of the last Les Pauls Gibson made before the PAF humbucker was invented. This is the Gibson Custom shop modern replica of that guitar. With this guitar you get some unique features that were only found in 1955. The guitar has a mahogany body with a maple top. The finish is an aged nitro finish. The neck is a set in mahogany neck with the special 1955 neck profile. In 1955 Gibson Les Pauls came with a more of a V shaped profile. They were just as thick as other 50s necks but they didnt have as much mass. The fretboard is rosewood with 22 frets. Up top you get a set of Kluson tuners and the bridge is a Tonepros wrap around bridge. The guitar comes with a set of P90 which give out awesome tone. The controls are typical Les Paul with a volume and tone for each pickup and a 3 way toggle switch.

The 55 neck on this guitar give it a unique feel that you dont get on other Les Pauls. It has more of a V shape to it like an old Fender but it is still pretty fat. Being a 55 it is pre tune-o-matic and pre humbucker so you get P90s with a wrap around tail piece. The simple tail piece does not lend itself to good intonation. It is a very simple design. The P90 pickups are still technically single coils so they will have a bit of hum to them. The PLEK process Gibson does to their high end guitars means they come from the factory with nice setups. They put the guitar into a machine and it uses a laser to levels the frets. This levels the frets more accurately than any person could and gives the guitar a nice factory action.

I personally love the tone of a nice P90 pickup. A lot of people think a P90 is like a Fender single coil but it really isnt. It has the single coil clarity but with the nice low end of a humbucker. It provides good clarity and good bottom end at the same time. This makes the pickups great for blues and jazz but it is also great for overdriven rock tones. I think is is better for rock tones than a normal PAF is. The PAF being super smooth can get muddy when you are playing with a lot of drive. The single coil top end sparkle that the P90 has gives it extra clarity that makes it better for drive tones.

Gibson 1955 Les Paul Goldtop Wraptail
4
The 1955 Les Paul gold top models are pretty special because they have that older bridge, but it's not the same one as on the 1954. In fact, I really like this one as it kinda reminds me of some of the PRS bridges. The guitar features a mahogany body with a maple top, mahogany neck with a rosewood fretboard, 22 frets, trapezoid inlays, pickguard, binding, hard tail bridge, two P90s, two volumes, two tones and a three way switch.

Gibson did an awesome job with the way they put this thing together. The guitar has no nut issues at all, and those always get me. I've found tons of Gibsons, even custom shop ones, that had nut problems. This one was perfect. The frets were also great, and there were no sharp edges. The binding nubs looked perfect up and down the fretboard, too. Sometimes the lower end models can even have humps on the fretboard, but this seemed to be perfect with no dead spots at all. The finish also had no runs. The only issue was that the neck joint is a pain, just like in every Les Paul.

The P90s in this thing are totally rocking. The first thing I did was test the clean tones through a nice Fender amp. They were chimey, but they never once got brittle. That's what I love about these P90s pickups. They're super fat but still have that great vintage vibe. I then checked them through a Marshall, and the thing totally roared. It was classic rock for days. I find that these pickups can be a bit underpowered with lower gain amps, and even sometimes higher gain amps if you're doing a certain style. However, I have a feeling most people who buy these aren't going to be playing death metal.

The guitar played great, sounded great and really hit the ball out of the park in the looks department. If you can afford one of these things, I highly recommend buying one. They're great guitars for that classic rock and blues tone.