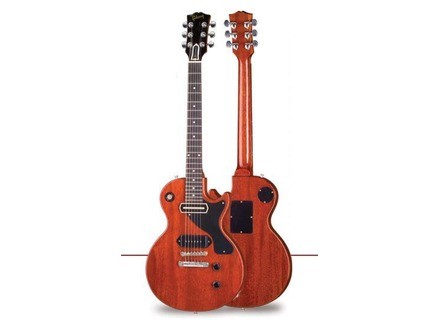 All user reviews for the Gibson John Lennon Les Paul

Gibson John Lennon Les Paul
4
John Lennon has always been a long time Gibson user, so it's no surprise that they'd release some guitars for him. This is a very limited model Les Paul Junior that he had made for him. The guitar has a mahogany body with a mahogany set neck and a rosewood fretboard, 22 frets, dot inlays, a standard hardtail bridge, one P90 in the bridge, one Charlie Christian special pickup in the neck, a modified pickguard, one volume, one tone and a three way switch.

I was never a huge Beatles fan, so I'm purely going by the tone and playability of this guitar more than anything else. The guitar itself was nice and lightweight. This is great for people who have bad backs like myself. The guitar was also resonant when played unplugged. The fretwork on this was top notch. The frets were perfectly level, and the ends were not sharp at all. The nut was also cut properly, and I didn't experience any tuning issues what so ever. The rest of this guitar is really pretty much the same as any other Les Paul Junior out there, and if you're a fan of the Junior models, you'll probably love this.

I always found the Juniors to sound a bit thinner than the regular Les Pauls. They just didn't seem to have that awesome girth that the normal ones had. To me, they always sounded a lot closer to the SG more than anything else. The P90 in the bridge is pretty cool. I was able to play blues and classic rock without any issues through the JCM800 that was in the store. The neck is an interesting pickup, but it was really nothing to write home about. I'm actually more of a lead player who does a lot of legato, so it wasn't really for me.

These can be very hard to find, and if you do find one, expect to start paying a small fortune for one. Because Gibson only made a few, they inflated the prices on the used market here in the States. If you're a fan of John Lennon, I recommend just getting a regular Junior as you'll be able to get his sound without much of a problem. This is really a guitar for the hardcore collectors only.