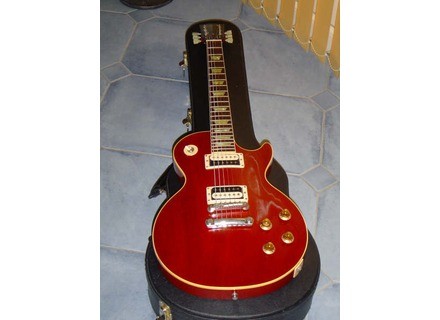 Gibson Custom Shop Les Paul Classic
4
This is called a Custom Shop Classic, but in reality, it'st he same as a normal Classic. The biggest difference was that this guitar had zebra pickups installed from the factory instead of the standard uncovered ones that are normally installed. The guitar features a mahogany body with a maple top, mahogany neck with a rosewood fretboard, 22 frets, trapezoid inlays, pickguard, binding, hard tail bridge, two humbuckers, two volumes, two tones and a three way switch.

The guitar is put together decently. I noticed that I couldn't get the action I wanted, and the frets were slightly flatter than they should have been. I wish GIbson would spend a bit more time on these guitars than they do currently. The inlays were pretty ugly, but that's just what to expect on the Classic series. They all have this ugly green color. The neck on this is the thinner 60s style neck, and it's a lot nicer than the 50s one, in my opinion. I prefer thinner necks, so this was more of my thing. It was slightly sticky, but a bit of 0000 steel wool fixed that up.

The guitar has the hotter Gibson ceramic pickups in it, and they seemed more geared towards metal than anything else. The bridge is very hot, and it's actually got some tightness to it. Don't expect super EMG tight, but it's about as tight as a JB, which is pretty cool. It works quite well for metal, and you can get a good rock tone with it, as well. However, it doesn't work great for blues as it's a bit harsh and direct at times. It's not bad; it's just not its thing. The neck pickup in this was a bit too bright for me. I had to keep the tone knob on half way for it to be thick enough for me, and then it just got kinda muddy. I tend to prefer fatter and more liquidy neck pickups as I use them for leads.

The guitar is probably one of the better deals on the used market, in my opinion. The Gibson Traditional is probably my favorite buy at the moment, but this would be a close second. If you're searching for one of these used, be wary of eBay as there are tons of fakes out there. Only buy from legit stores or people you trust online.
Did you find this review helpful?yesno
»