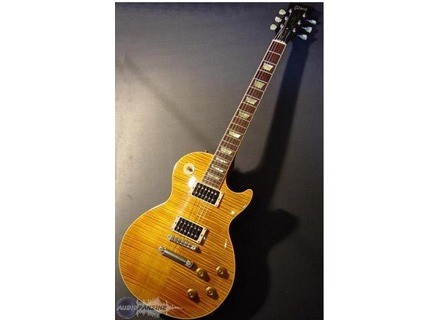 Gibson Les Paul Classic Premium Plus
4
If you're looking for a good looking Gibson at a more affordable price, you'll want to check out the Premium Plus models. These are Classics, but they feature a nicer top than most other models that Gibson offers. However, they're not nearly as expensive as some of the higher end models for whatever reason. The guitar features a mahogany body with a maple top, mahogany neck with a rosewood fretboard, 22 frets, trapezoid inlays, pickguard, binding, hard tail bridge, two humbuckers, two volumes, two tones and a three way switch.

The guitar had a DiMarzio PAF Pro set installed in both the neck and the bridge. I normally don't see this pickup combo with these guitars for some reason. The PAF Pro is normally found in guitars like Ibanez and the such. The bridge was very open, and it took gain nicely, although I kinda felt it lacked some dynamics. It delivered a good rhythm tone, and it seemed to match quite well with the wood combo. The neck was also very open and clear sounding. It was great for lead lines, and it had just enough output to make life easy when it came to doing those fast shred lines. I generally tend to prefer Duncans in Les Pauls, but these were a cool change of pace.

The top on this is the reason why you should buy it. It's a very heavily flamed maple top, and it looks great in person. It has an almost 3D effect to it at times. Aside from that, it's pretty much your standard Classic that everyone already knows and (kinda) loves. They're solid guitars, and with a proper setup, you'll get one great guitar for your money, especially when you realize how expensive some of those boutique flame topped guitars can be.
Did you find this review helpful?yesno
»

marcowylde's review (This content has been automatically translated from French)

Gibson Les Paul Classic Premium Plus
5
Here is the Table:

Manufacturing Amricaine course, in the new plant in Nashville

2 humbuckers type Cramic without cover, the famous Gibson 500T in the bridge position is devastating!

ABR bridge the old one is that the screws are directly taken from the table without pegs ...
stop along the famous bar. Mechanical Kluson type simple. All hardware is nickel, a nine is that it shines and old dull! How old!

AA Flamed Maple top, Mahogany body, neck Aacajou, Key Palisandre 22 frets, graduation trapzes, all ends as if it had already spent 20 years in the sun (the patent on this model is Brilant course when buy new!)
The handle of mine is a round thin profile type 1960, there is a larger type MODEL 59 (Les Paul Custom Review conf more)

The handle is a real highway! impressive, easy to play up and down!
(I speak for the who knows what the big race of the standard or custom etc ...)

The eternal problem of the Les Paul is still!
5 dernires the boxes and the weight! but I will not dwell on it because like the whole world that plays the above, I have taken a game fits!

To view the sections conf Les Paul Custom more ... it's the same except that the Classic sounds a bit harder than the custom ... I told him al PAFS 2 EMG 85 in severe and acute in 81, which increases in core over this type of sound

It's my Les Paul Premire (True not copy anything!)

This is no longer MODEL! And yeah! tanpis you had to be the first! MODEL remains a replacement!

The Les Paul Standard 2003 and 2004 who return this sleeve, the same wood, style!
Ok good! it is not given either, but it is the only like it! A mediator and test your self has!
Did you find this review helpful?yesno
»

Woodchi's review (This content has been automatically translated from French)

Gibson Les Paul Classic Premium Plus
1
Little noticed by the repoort previous comment, the prod of the craft began in 1993. In any case, my own date of that year. The violin is finished. I remain skeptical about the use of ear on the head (small rods placed on the edge of the head that simulates a reversed headstock ...).
When I bought it at the time, the cap selector was orange! I replaced it with a chrome, as well as the truss rod plate. It is quieter and more harmonious.

The ABR-1 bridge to the old is no better than the new bridge. He respects the most flamed maple since the holes are smaller Maisen terms of stability, new more efficient I think. I had to replace it because the nickel has oxidized over time and has crumbled. I took it for chrome to have no pb ...

Put notes on features, it's weird anyway. 10/10 for those who like to play while LES PAUL. 0 / 10 for those who do not understand this enthusiasm LP. 7 / 10 for me because for the price, the little details like that need not be neglected.

The handle is nice, the frets may seem a bit high, however. For sound, I do not understand why, without being stronger, can you hear to make you free points.

Jazz, rock, metal variety. Yep, it works well in all cases. Play it the same on a Start on one LP, or at least not the same. Still, she has a life of its own and it looks like it guides the way you play very significantly. When I play, I have the impression of being two.

12 years of use. The table is aging very well, and the varnish patina brings out even more waves (perpendicular to the axis) and veins (parallel to the axis). I have good shoulders now. But it's wood, real good, very heavy which makes the sound.
I find the price delusional exaggeration. In 1993 it was worth 11,700 francs (€ 1,700), the friend says that in 1998 it was worth more than € 3000, and now the argus the coast between 4000 and 5000 €. Uh ... it's still the same. I think the ratio Q / P is very bad. This is the price of a guitar luthier, or even more when it is mass produced with machines already available, waste wood important for cutting and shaping of the handle of the head. At that price today, I'd rather see a luthier who can do this to me again and pretty much cost. Must not be fooled by all the pseudo legend around there gibson. With experience, even for 2000 euros, I'll see a luthier.

See all 106 photos of Gibson Les Paul Classic Premium Plus »