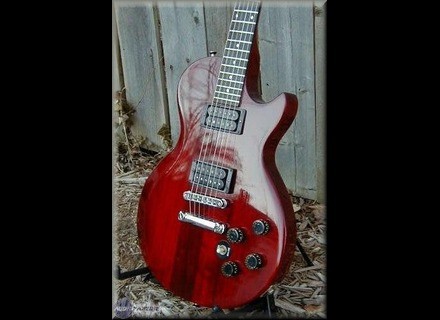 The Paul, LP-Shaped Guitar from Gibson.

Gibson The Paul
4
This is a 1979 Gibson 'The Paul' It has a walnut body and the traditional Les Paul double humbucker pickups. It has a three piece neck and three way switch. It was introduced a more cost effective Les Paul than traditional Pauls with fancier hardware and appointments.

The guitar was my uncles closet guitar that he never played. He told me I could borrow it, which I did for about four years. I keep trying to get him to sell it to me but he just won't part with it, his closet would be lonely.

If you like the way a Les Paul sounds and plays, this is the guitar to get. You can pick up one of these vintage Gibson's for around $800 which is a huge pro. It is beautiful with the natural looking walnut body. I am a fan of simple appointments as well, there is no gaudy gold hardware. I love the pickups, they are not as hot as something like a burstbucker. They are great for that jazzy paul tone and very responsive. If you are looking for thick distortion, the stock pickups are not what you are looking for. The three way switch is simple and efficient, labeled lead/rythm and in the middle.

The guitar is a little heavy but it isn't any heavier than any other Les Paul I have played. I am just used to playing a lighter guitar now.

It was built over thirty years ago and is still going strong. It has the original pickups and even the original solder joint. It has many years of playing or sitting closet left.

Overall it is a great guitar. It is much more affordable than a standard Les Paul, sounds great, looks cool vintage, and will last forever. Buy one if you get the chance.

Gibson The Paul
4
Lctrique solid body guitar, mahogany set neck and rosewood fingerboard. The Paul of the 1979 silent I possde up two humbuckers splitables. It has two volumes, two tones and a slecteur three positions. Silent natural finish. This was the era of the entry-level Les Paul

The instrument is more comfortable than a Les Paul Standard as the lack of table Saddle makes it more lightweight, which, incidentally, is not evil. The balance of the instrument and maintenance agreement is good. It remains in each configuration Gibson classic. Its handle is enjoyable, but less than a Standard which nets soften the feel.

I used this guitar with amps Marshall JTM 60 and JCM 900 ... The sound is quite plolyvalent. Splitter into the microphones, the result is a Fender, but with a touch warmer. In doubles, it is close to the Les Paul Standard, but the sound is significantly worse: the duration of notes is infrieure, saturation less strong, not to mention the finesse ... In short, we do not find me in the traditional Les Paul. However, to play blues or rock, a sound even when trs well. In fact, this instrument is between the LP junior with microphones and simple p 90 LP Standard double up.

I used this guitar three months. I probably would have kept if I had not had better home. I apprci comfort and versatility of sound. But I prfrais the sound of my Standard is suprieur, although less versatile. This guitar is a good choice for those who want an instrument half way between Fender and Gibson, comfortable and strong. But he who wants his "Jimmy Page" has to go his way. There are better elsewhere. The price is right, but not amazing.

Gibson The Paul
5
This guitar was marketed in France beginners 2000s. US-made it all the CHARACTERISTICS of a LES PAUL MODEL. To save on the cost of the body is mahogany, thin enough and the buttons are rglage bell-shaped, slightly smaller than the high-end LES PAUL. By the microphones seems to be against the same as a LES PAUL CUSTOM, caching and less. With the handle it is in GIBSON, wide enough to put a little complicated agreements. The frets are a little thinner than what I know on other guitars of this brand a little older, but not Gnant. Overall CHARACTERISTICS gnrale t tudies have to offer a reasonable price given that the same high-end guitar. The whole is homogne close to excellence.

Lgret the fact that this guitar is an instrument of scne. We can move with. The handle is great, it allows a few errors in placement without rings false. Having no double notches, Access in acute is not the top of what is available on market but how many guitarists play rgulirement on 22 nd, 23 th and 24 th box, I do not know much. The sound as it is exactly the same as on a LES PAUL CUSTOM. Ms. branch not this guitar sounds of hell, I think the strings are mounted are for many, I put on Ernie Ball 11-48 is adapted for pulling this instrument and we just play in any style.

Whether Jazz in picking Knopfler (intermdiaire position) in Hard Rock and even in gnrale FUNK is excellence. What's more, when it trs trs good there is no write much.

I use this guitar for 5 years, lgret the fact that we can win easily with either, its outstanding sound can compete with guitars much Chres. I have other GIBSON and FENDER, with all my guitars I think it's the one with the best qualitprix, I had bought a little under 1000 euro (c'tait still francs the era) now if we rfre the hill I see that it is an instrument that has hardly lost its original value. Ah! The United States is a quality GIBSON rel investment, so I like this instrument that offers the same sound that a guitar three times CHRE, I bought one in a deuxime color diffrent I leave granted in open tuning of r which allows me to play some blues with the right sound.

jacqn's review (This content has been automatically translated from French)

Gibson The Paul
5
See other opinion, nothing to add

I find it a bit heavy, but a nice look to the old
Very nice sound, very versatile

Its low in fat, and quite clear in the treble. But it's not a Start of course

I bought mine in 1979 at age 13. I wanted a Start (a dream) and a guitar more 'jazz' to compensate. The Paul's had just come out and I've made the recommended.
But ultimately it is this that I found most pleasant to use (stratum 79 was finally a real heavy m. ... hyper, I sold it in 2003 with a torn old avid gratis ).
I am more touched this guitar for almost 20 years! In 2003 I tried to sell it on Ebay for 800 euros, not a single buyer, even at 600. I have been offered 400 for the worst so I kept it.
And since 2006, I returned to the guitar and I rediscovered this free with happiness.
The strongest is that it is a model 'Lost': it is not even listed on the site Gibson U.S.! so that when I put it on Ebay, I was told that this Grat ... existed!
I am not a connoisseur, but I'm emotionally attached, and I really think it is a well made guitar, as we did in those days, with a beautiful sound versatile.

Added: I just have it set in a store in Nivelles - the guy told me that she is at least 1000 euros and has potential buyers - or even 2000 if it is black! - Well, I do not know if it's true, but somehow I keep it. I find no gratis this quality is at a reasonable price anyway.

Come on, even a 'edit' to honor the Grat: Sunday to repeat it: the other guitarist in my group has bought the same amp as me (Marshall VS100), we were all on channel 2 OD1, same setting, Epihone him with a Les Paul but he changed the pickups (beautiful red, gold hardware), I with my shovel beast The whole Paul Gross. The vâââche! there is no photo, I keep my gibson for life!!

Other names: the paul, thepaul