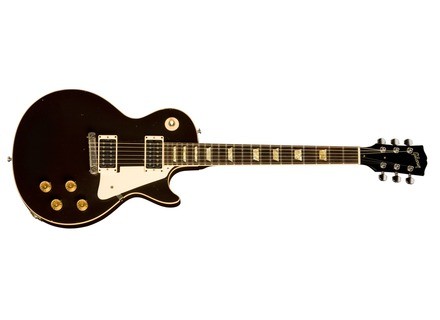 Gibson Jeff Beck 1954 Les Paul Oxblood
4
Jeff Beck before he was known for his strats played one of these Les Pauls. It has a custom color which stems from the custom refinish the guitar was getting back then. This is Gibsons Custom shop's modern replica of that guitar. The guitar has a mahogany body with a maple top. The set in neck is mahogany with a custom profile matching the original. The profile is based off of a 50s profile but slightly thinner. The fretboard is rosewood with 22 frets. The guitar has a thin nitro finish to let the wood breathe. Up top you get some Schaller tuners and the bridge is an old style wrap around bridge. The pickups are a set of modern Gibson pickups with a Burstbucker 2 in the neck and a Burstbucker 3 in the bridge. The controls are typical Gibson with a pair of volume and tone knobs with a 3 way toggle.

This guitar plays like an old school Gibson. The 50s style neck is a real boat. People call it the baseball bat neck for a reason. You are really holding on to something when you play a 50s style Gibson. The wrap around bridge is very vintage too but not in as good a way. This style of bridge limits intonation so you wont be able to get a perfect level of intonation on the guitar. You can replace this bridge with an aftermarket unit but thats not really in the style of this guitar. Ive personally seen a couple examples of this model guitar with messed up fretboards from the Gibson factory. I saw one which had its fretboard and the fretboard looked like half of it was finished and the other half wasnt. It seriously looked like 2 different pieces of wood on the fretboard. I would not recommend buying any guitar this expensive without playing it first.

I am not a big fan of the Burstbuckers in this guitar. With a guitar this old I would expect some Classic 57's but since this is replicating a modded guitar the pickups that were in it might have been hotter than an old school PAF. With the Burstbuckers you get more of a hot rodded sound. These pickups have a little more edge to them then a set of more traditional Gibson pickups. You can really rock out but you can still get the traditional blues sound that you expect from a Les Paul. The neck pickup can get a little muddy but that is a trait just about every Les Paul has.

These guitars are not very good once you consider the price. These guitars are more for collectors than real players. For the price of this guitar you could get a fully custom guitar some where else. If you are a Jeff Beck fan of a Gibson collector and absolutely have to have every Gibson you will probably buy this guitar. Otherwise you can find guitars that play better and sound better and are much much cheaper all over the place.

Gibson Jeff Beck 1954 Les Paul Oxblood
5
This is actually a Jeff Beck signature. While he's mostly known for his Strat playing these days, he was a heavy Les Paul user back in the day. To commemorate the guitar he used to play, he got his own special model called the Oxblood model. The guitar features a mahogany body with a maple top, mahogany neck with a rosewood fretboard, 22 frets, trapezoid inlays, pickguard, binding, hard tail bridge, two humbuckers, two volumes, two tones and a three way switch.

Considering this is a custom shop guitar, it should be of no surprise that the guitar itself was put together great. First of all, the nut itself was cut perfectly. This is a part where a lot of Gibsons can miss the mark, but this was spot on. The fret work on this model was pretty good, too. I didn't notice any real sharp edges on the frets, and they were all properly crowned. The bridge itself feels different, so keep that in mind if you're going to buy this guitar. It almost has that PRS kind of feel to it.

This guitar sounded pretty good. The bridge pickup had a real fat tone going on. It worked decent for clean, but it was at its best once you start adding some gain. I put this through a Marshall, and it worked awesome for that hard rock kind of sound. The neck pickup was pretty nice, too. I got a cool singing lead once I started lowering the tone knob. Personally, I'd like a bit more output than what these offer, but that's a small complaint as the guitar isn't really made for the music I play.

Jeff Beck's mojo still runs strong with this guitar. The guitar feels a bit different thanks to the bridge, so be sure to play this before you buy it. You may or may not like it. Aside from that, it's pretty much standard affair when it comes to classic Les Paul tones.
Did you find this review helpful?yesno
»