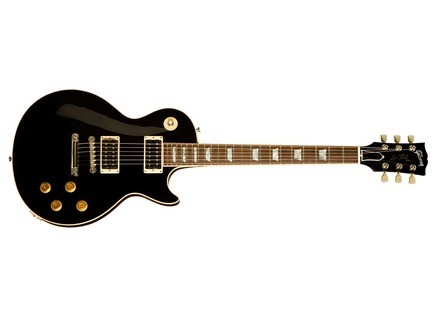 Gibson Les Paul Axcess Standard with Stopbar
4
If you're like me, you've always been complaining about the upper fret access on Les Pauls. Gibson has finally fixed that, and they even offer it with a floyd. This is the standard tail piece model, though. The guitar features a mahogany body with a maple top, mahogany neck with a rosewood fretboard, 22 frets, trapezoid inlays, pickguard, binding, hard tail bridge, two humbuckers, two volumes, two tones and a three way switch.

This guitar was put together great. The nut on this was cut properly, so there were no issues regarding nut angle, having it too deep or whatnot. You can tell when you have a bad nut because you'll always be going out of tune, and you'll sometimes even notice the string snag on the nut. The frets on this were also top notch. They were crowned nicely, and the edges weren't sharp. The biggest improvement with this is the upper fret access. You no longer have to struggle with getting towards the upper frets anymore with this model.

This guitar was pretty light, and it was very resonant. The pickups in this aren't exactly my favorite, but I've never been a huge fan of Gibson stock pickups to begin with. The bridge pickup got a very fat sound, but it was also clear, so no issues there. I wish it had some more output since I'm used to pickups like the JB and whatnot, but whatever. The neck was a bit bright for my tastes, but a turn of the tone knob seemed to fix that issue. Again, a little more output would be nice on these.

The guitar is probably my favorite playing Les Paul. However, the price on these models is outrageous for what you're getting. I can get a Gibson Les Paul Classic which is roughly the same thing minus the sculpted heel and pickups for about two grand cheaper. If you can afford this, go for it. It was too rich for me, though.

Gibson Les Paul Axcess Standard with Stopbar
5
THe Gibson Axcess line of guitars are guitars for people who want the lightest possible Les Pauls. I guess they have hurt their backs over the years playing real Les Pauls and want something lighter. These guitars have super thing bodies and are still weight chambered so these guitars are light as a air. You get a mahogany body with a maple top and a 1 piece set mahogany neck. The neck join is super carved away so it feels like a neck through guitar there. The fretboard is rosewood with trapezoid inlays. The tuners are Kluson style tulips with a standard tune-o-matic bridge down at the bottom. The pickups are a set of Gibsons a 496R in the neck and a 498T in the bridge. These are not my favorite Gibson humbuckers. You get two volume and two tone knobs with the the ability to split the bridge pickup with a push pull pot. There is a standard 3 way toggle on the upper bout.

These guitars are very easy to play for Les Pauls. Their thin and chambered bodies mean the guitars are super light. They have extra contours on the back so they are comfortable there as well. The neck joint on this guitar is super smooth and I dont know why they dont just do it for all of their guitars. These high end Gibsons have a PLEK machine setup. This means the guitar is put in a machine and the a laser is used to level the frets to perfection. These guitars have a great setup right out of the box because of this.

The one on this guitar is pretty odd because of the body. It is thinner than a normal Les Paul and it is weight chambered. I dont know how light they needed this guitar to be but I find this pretty excessive. The classic Les Paul tone comes from a thick piece of mahogany with a maple top and a fat mahogany neck. This guitar has a thin mahogany body with a bunch of swiss cheese holes in it. Something has got to give. Gibson wont change the angle of their headstocks because they claim they sound better and even admit that the angle makes them very prone to breaking. But they are willing to turn their bodies into swiss cheese because it is out of sight and out of mind. They say the chambering doesnt change the tone either. If cutting a tone of holes in the body doesnt change the tone how could changing the angle of the headstock do anything. This guitar plays very well and is very comfortable but the tone is not there. They didnt even put their best pickups in it. It has pickups of a Les Paul studio. It has a coil split but if you are a Les Paul player you have got by for years without these and I dont think you are suddenly going to use them now. If Gibson is going to charge 3000 dollars for a guitar they should at least put in some Classic 57s if they have to keep it in house.

These guitars are pretty popular among older professional players who have long sets and such. These guitars are intended more for live use where the specific tone of the guitar is not as important as playability and comfort. With this guitar you can play a long set without your shoulder falling off or your back breaking. Things like the upper fret access and the neck joint are things I think they should have all every Les Paul. They wont do it but they should. If you are a gigging pro and need a Les Paul that you can hold up all night here it is.
Did you find this review helpful?yesno
»

Gibson Les Paul Axcess Standard with Stopbar
4
Gibson has made some scratch your head type guitars that makes me wonder what are they thinking and then they come together and take and existing product and make it better.They have taking a classic American guitar and compounded upon its glory. The features that has impressed me is simply the axcess part of this guitar. If you have ever played a Gibson Les Paul or just picked one up at a local shop or store you have felt a study piece of wood. What you have also found is that unlike a Gibson SG where you have complete and utter access t the upper frets, you don't with this a Gibson Les Paul. Now with the axcess features you can rip up the fretboard with speed and not be confined to limitation of the higher frets.

These guitars make me want to play and play with extreme passion. I love Gibson Les Paul so much that they have been my favorite guitar for years. I always had one problem though, not being able to reach the higher frets. This was so limiting to me compared to the Washburn N4 which had a cut away and allowed my to reach the 20th fret with not complication at all.

This has not been a must own for me. The deep mahogany tone and now with the fret access is a dream guitar. This is a custom piece so it is expensive but it is Gibson's gift to guitar players around the world. So this guitar will sustain better in the higher register because of your fingers not being able to press the notes accurately.

These guitars come in new at around $3000, which isn't that bad compared to other Gibson Les Pauls. This is still a lot of money for most people including myself but well worth the price if you can score one. A Gibson Les Paul will be handed down to your kids one day because you tend not to sell them. They are lifer guitars and just absolute tone monsters.
Did you find this review helpful?yesno
»

Gibson Les Paul Axcess Standard with Stopbar
5
Gibson has recently released a more modern version of the Les Paul with a special carved neck joint. This is the guitar for people who disliked the floyd rose on the main model but still wanted that extra upper fret access the new guitar boasts. The guitar features a mahogany body with a maple top, mahogany neck with a rosewood fretboard, 22 frets, trapezoid inlays, pickguard, binding, hard tail bridge, two humbuckers with a coil split, two volumes, two tones and a three way switch.

I've always had an issue with the Les Paul neck joint, and this guitar finally fixed that. I'm a lead player, and it always seems to get in my way. With the newly sculpted joint, I'm able to reach the higher frets easier without having to struggle as much. The nut was pretty good on this, and the fretwork itself was top notch, too. The guitar has a push/pull pot on it, and all the electronics were of high quality. It's something you take for granted most of the time, but once you start playing the lower end Jacksons with the push/pull pots that always break, it's the small details like those that really help make these higher end guitars stand out.

The guitar sounded decent. I'm not a huge fan of the way the stock pickups sounded in this. The bridge had some bite going on, but it was also girthy. I wish it had some more power as I mainly play metal. The neck pickup is what I'm really not a huge fan of. The neck pickup had some bite, and I'm a huge fan of those super dark and powerful lead tones that something like the EMG 85 brings to the table. It just lacked the overall output and girth that I was looking for in a neck pickup, and when I turned down the tone knob, it just felt muffled.