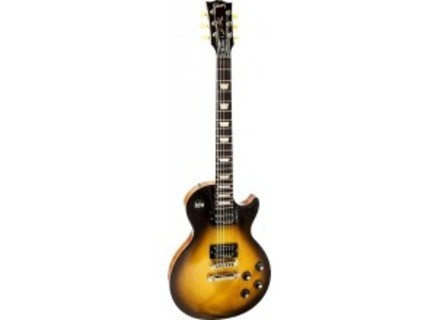 Gibson Les Paul '70s Tribute w/ Min-ETune
4
This is a Les Paul Made In USA, with all that that implies (bridge tune-o-matic and company).
The handle is 70's style summer, so neither too wide nor too thin.
For the rest, it is a key rosewood on maple neck and mahogany body, 22 frets, 2 pickups H (Dirty Fingers), a 3-position selector and volume and tone per pickup.
And most importantly, a Min-anda system for guitar accords alone (and yes!)

The handle 70's is my favorite. The grip is good without the object is cumbersome. Perfect for this point of view.
The downside to this level is the level of freight rates. They are poorly cut and protrude from both sides of the handle. This is really unacceptable, especially when we touts U.S. quality!

In terms of shape and weight, nothing wrong, it is convincing is a LES PAUL anything. Although it is quite a bit thinner and lighter than standard small. When playing standing, it does not look like a SG, it is stable.

Access to acute is not the easiest (it is not a SG either) but that does not stop playing. It takes getting used to. I have long played on Les Paul so it does not cause me a problem now.

At the sound, it is okay without being transcendent. The pickups sound great, but lack of personality for those looking for a unique sound.

I am a little disappointed at the finish. Washer ("rhythm Treble") turned on itself, freight badly cut. Satin varnish (beautiful) seems very fleeting.

The Min-anda system is a real revolution against. By selecting from an unimaginable number of tunings banks (downtune, drop D, standard and dozens of others), it was confirmed, ropes and miracle you scratch, the key turning herself and the guitar is perfectly tuned. It does not take more than 20 seconds to re grant or change tunings.

I use it with a Marshall Valvestate VS265R a BOSS GE-7 Equalizer, a Crybaby Wah and a DS-1 during modding.
The sounds are very acceptable, it sounds heavy and less fat than a Les Paul Standard (bigger and heavier too). I play everything, BLS, Zakk Wylde, Slash, Buckethead, the sounds are really acceptable. We feel we are on the Gibson though microphones should be changed so that you can give the instrument more character.
Basic instrument was set incorrectly. So I made set in stores.

I use it for more than three months now. Before I played SX Stratocaster, Epiphone SG, Custom77 Les Paul, Epiphone Les Paul Standard Plus and Ibanez RG350EX.
She quite fit my musical style (GN'R and co) but now I intended to make the instrumental and I try another sound model (Ibanez RG2550).
Gibson 70's Tribute remains one of the best tools I've tried and certainly the best I've owned.
I was really disappointed with what little trouble finishing, but apart from this, it satisfies me ..

If it again, I will not repeat that choice ONLY because I change my style of music and I turn to another model.
If I had stayed in a Rock style, I will again this choice without problem, but I would have made upgrade (microphones, filing of freight)