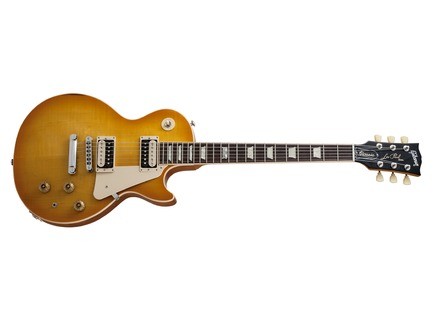 lumpy_51's review (This content has been automatically translated from French)" Brilliant!"

Gibson Les Paul Classic 2014
4
Well everyone knows that it is manufactured in the USA in Nashville ...
Nice Vintage brown box which team it's rustic!

MORE: I say it is a Slim Taper Channel 60's (Yep most sites are planted they only have to go ask at Mother House, it is indeed a fine 60'S sleeve! !)

So to end the inning Gibson and super nice!

Plus: Small Boost that allows, as its name suggests; to give more recognition to the microphones 57 and 57 in the bridge super!

The least: Yep I have to put a big !!!
For a guitar at this price point, back in the luthier for polishing frets !!
SHAMEFUL !! I know if the controller Gibson had drunk a drink but
unforgivable !!

For sound: Hey ben found the famous 57 expected with a touch well with the spicy boost!

- On a Bugera v22HD it is pure happiness blues lot of guts !!
- On a Marshall JVM410H well then you can do anything that is hell!

Well apart from the big downside for polishing (I may be fallen on bad!) Otherwise it's a great sounding Gibson extremely well and very versatile!
It is sure that is the Gibson so it's "roots" we like it or not!