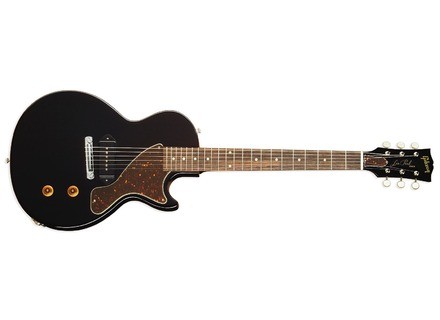 Gibson Billie Joe Armstrong Les Paul Jr.
3
If you're a fan of Green Day or just a fan of Billie Joe Armstrong than this might be an instrument that's your cup of tea. If you're not really into the signature conditions of any type of music gear then I would bypass the sig guitar. This is basically a Les Paul Junior guitar that is built to his specs so to speak. You're not getting get that much difference from the regular Les Paul junior guitar. It's a cool guitar with its H 90 pick up configuration. It has a very genuine tone and its pretty great sounding overall.

This guitar is basically the same guitar as a Les Paul Junior guitar. You get virtually the same sound and tone as you would any other Les Paul Junior guitar. The difference between this and a regular Les Paul guitar is that you're going to have a tone a little bit focused and frequency route in the mid range. So where is the curricular Gibson Les Paul guitar you have a thicker chunkier tone, this guitar will have a little bit thinner but more middle focused tone. If you're going for a tone that is similar to the first couple Green Day albums than this is not the guitar to get a grab. Billie Joe would use a Fender Stratocaster type body guitar in those days so the tone was a little bit different than this. This guitars is more for the later albums and the newer sound that Green Day is coming out with.


At new you can find guitar for right around $1400. Not a bad price for a Gibson guitar but is certainly more than a regular Gibson Les Paul Junior guitar. That's partly due because the signature series model that is attached. Overall it's a cool signature instrument but if you are like me then you probably not going to care about the signature side of things and don't want pay the extra dollar just to have someone's signature instrument


2 of 4 people found this review helpful

Gibson Billie Joe Armstrong Les Paul Jr.
4
The Gibson Billie Joe Armstrong Les Paul was made for Green Day's frontman as a mass produced reissue of his famed '56 LP Junior, nicknamed Floyd. That guitar has a killer raunchy tone as per '50s Juniors, and he wanted to release a version for all the kids that were clamouring for one like his. It's basicallt a '50s reissue Junior without any tricks but also without the price tag of the Custom Shop '57 reissue.

It features a mahogany body and neck, slab style. It has a rosewood fretboard with 22 frets, vintage style tuners, wraparound bridge/tailpiece and a single rippin' P90 pickup. Actually... it's a hum cancelling P100, but it's stuck underneath the classic dog ear pickup cover so it looks just like the real deal. Made in the USA of course, this guitar is the closest thing to a '50s Junior you'll find for the price, well... anywhere.

This guitar takes all the frills and fancy from a Les Paul and throws it out the window. Fortunately for many of us it takes a lot of the weight away too... it's a great guitar to jump around with for sure. It's no more ergonomic than a typical Les Paul save for the weight and lack of a carved top which might make things easier on the arms, but it's still a hog at it core. The upper fret access is decent enough on these guitar as with any Les Paul, but it's not nearly as great as many other guitars... c'est la vie.

Getting a good sound... well, lets see. You plug in, turn the volume up and you're off to the races. There's one pickup and bare bones controls. With a guitar like this you have to learn to use these controls and pick attack/dynamics to your advantage if you want any versatility

I've tried this guitar through a few different amps and I've concluded that it, like most Juniors, responds way better into a rawer overdriven amp than anything. The clean tones are decent enough for sure, but they might be too bright for some people. That and the P100 has a lot of raunch and extra output that kinda drives clean tones into a mild overdrive anyway. It's a rude sounding guitar and if you play rude ol' rock n' roll, it's exactly what the doc ordered.

The drive tones can be summed up in one word assuming you are buying it to use as a rippin' and crazy rock guitar.... "perfection." Hitting an open chord results in the best old school rock tone I've ever heard... full of saturation and overtones that just send chills up my spine, but still with a refined Gibson quality that allows the tone of that awesome mahogany to come through... so cool.

All in all I think the Gibson BJA Les Paul Junior is a killer example of a Les Paul Junior for the $1,200 new price point it hits. It does that great punk/hard rock vibe with ease and the modern tweaks such as the noiseless P100 really help to make it a great gigging guitar as well. Plus it comes with a really freakin' cool case that has lepoardskin print inside it... thank you Billie Joe!