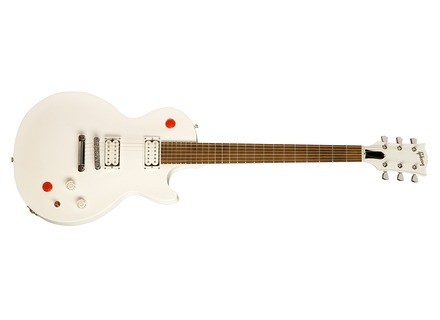 Gibson Buckethead Les Paul Studio
3
Sometimes guitar companies come out with signature guitars and you think "Why would they make that?" This is one of those guitars. This is the Gibson Les Paul Studio Buckethead model. There is a Les Paul Custom Buckethead model but those are super expensive and I dont think Ill ever get my hands on one of those. Both guitars have similar specs. The specs on this guitar are quite unique. The guitar is finished in the signature white finish with white knobs. The body is chambered mahogany with a mahogany set neck. The scale on the neck is 27 inches. Due to recent problems with Gibsons supply of rosewood this guitar comes with the new "Baked Maple" rosewood alternative. I think they take some maple and cook it or dye it or something so its slightly darker and looks like a light peice of rosewood. It does not feel like rosewood but I guess the look is what they were going for. The 27 inch neck has 24 frets and you do not notice this at first because ther are no fretboard inlays. The tuners up top are Schaller locking tuners which are nice. Gibson needs to put locking tuners on more of their guitars. The controls on this guitar are what make it really crazy. You get a master tone and master volume. The 3 way toggle is down by the rest of the controls and then you get 2 arcade button kill switches for funky Buckethead tricks.

With the chambered body the guitar is not very heavy. The most unique thing about this guitar is the new baked maple fretboard. It kind of looks like rosewood but it doesnt feel like it. It feels more like ebony. It is hard and dense and there are no pores or anything. I kind of like the way it feels but I dont like the pale look to it. The 27 inch scale takes some getting use to and this isnt helped by the lack of inlays. A 24 fret Les Paul is quite unusual as well. I like the placement of the pickup selector but two arcade button kill switches seem excessive to me. Im wouldnt be using that feature to begin with so 2 of them bright red sticking out like a sore thumb on the guitar seems over the top to me.

Im not sure Buckethead uses the pickups that come in this guitar. This guitar has pretty standard Gibson pickups (496 and 500) and they do not really have the same tone that buckethead is known for. When I think of Buckethead I think of a high gain compressed shred tone. These pickups have a pretty classic rock tone to them. I was expecting this guitar to come with a set of Dimarzios or something but no it has standard Gibson jobs in them. These pickups work perfectly fine if you want a normal Gibson sound but if you wanted a normal Gibson sound you would have spent your money on a normal Gibson. The Kill switches are fun for about 30 secconds. Unless you are Buckethead I cant see them being that useful especially two of them.

This is one of those signature guitars that should have just stayed an artist one off. I dont see why many people would go out and purchase this guitar. It is so specialized not many people would be able to use it effectively and people who do want a Buckethead guitar are not going to have a good shreddy tone without a pickup swap. You can make a Buckethead style guitar easily without being obnoxious or looking like a complete clone. With this guitar you are both. The saddest thing is that the proper Buckethead guitar costs like twice as much as this one.