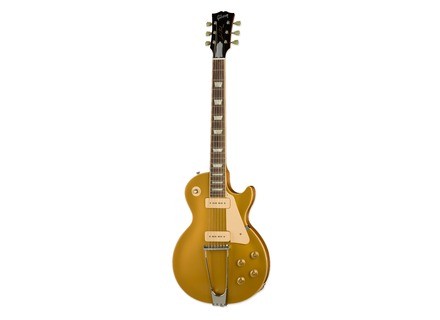 Gibson Les Paul Tribute 1952
4
This guitar is based off of the original Design Les Paul did for Gibson. They are remaking it now after Les Pauls death to cash in I guess. This guitar has a mahogany body with a maple top and the famous gold top coloring on top. It has a mahogany neck with a rosewood fretboard and 22 vintage frets. It has a set of P90 pickups which it would have came with at the time. Each pickup has its own volume and tone control. The bridge is a replica of one of Les Pauls original patents. It is very easy to see why this bridge was quickly replaced. The headstock has "prototype" stamped on it to give it more of a special early 50s feel.

This guitar certainly plays like an old Gibson. Its up to you if you like that or not. It has the 50s neck profile with this very big and thick. The frets are very vintage and small. They use to call old Les Pauls fretless wonder for their ability to play so well with the tinyiest of frets. The prototype bridge design is a strange thing and it feels pretty flimsy. I dont think the large hollowbody style tailpiece adds much to the guitar other than weight. Upper fret access and all that is typical Les Paul. You will be straining to get to another above the 15th fret because of the neck joint.

With the P-90s this guitar sounds great. P-90s are some of my favorite vintage pickups and they can still hold their own today with heavier music. When this guitar came out this would most likely be playing jazz or blues and it does that great. But with the P-90s you can throw some extra grit on the sound and they hold up well. These pickups typically have an output of 7k but the way they deliver this output is what makes them great. They have a mix of single coil twang with the smoothness of a PAF. Its like a crispy humbucker. The PAF has a more refined and sofisticated sound since it came out 10 years later but the raw sound of the P-90 is something special. Not many vintage hardware pieces have been able to stay useful for so many decades. In the early days these were used for jazz and from the 60s onwards people used them to get great hard rock and early metal tones. Not that you would ever be playing metal on this guitar. You probably wont be playing anything it is probably going in a vault some where or glass case.

I could never afford this guitar the only reason I can is because there is one in the shop. I expect it to be here for a long time because I doubt anyone else can afford it either. These guitars are made more for collectors than players. This is one thing I dont like about the guitar industry now. It is just endless reissues. The companies hardly ever do anything new. The level of advancement in guitar techology is barely moving forward as more and more guitars are just rehashes of older designs. Anyways if you have the money and want a very early Les Paul design this guitar is probably the closest you can get without a time machine.

Gibson Les Paul Tribute 1952
5
The Gibson Custom Shop Historic 1952 is a replica of the original guitar made back in 1952. The guitar has a mahogany body with a maple top, mahogany neck with a rosewood fretboard, special bridge like what was used on the original 1952, 22 frets, block/trapezoid inlays, a pickguard, two P90 pickups, two volumes, two tones and a three way switch.

This is totally old school. For one, you have this really odd bridge that's not found on many guitars. It feels different, and it can be very polarizing for today's guitarists. Personally, I'm not a huge fan, but I can't fault it for that. The fretwork on this was great. The frets were properly crowned, and had a nice bevel to them so they don't cut your hand. The nut was also cut nice, which is great. Fit and finish was top notch on this guitar.

The sound is pretty amazing. These are low output P90s, and they really give off this vintage vibe. For those who have never played a P90, it's similar to a single coil. I like to think of them as the polite man's single coil because of how they act. They're a little thicker, and they seem to have that vowely tone in spades. I loved playing classic rock with the bridge in this guitar. The neck pickup was kinda hard to solo on, but I'm mostly a metal/shred guitarist, so keep that in mind.

If you have the money to get one of these and love the 1952 Les Pauls, it's worth getting. Aside from getting the actual thing and spending a life's fortune on it, this is about as close as you'll get. The pickups sound great, it resonated nicely and the fretwork on this was top notch. One of the few good things to come out of Gibson's shop within the recently slop of the Standard series these past few years.