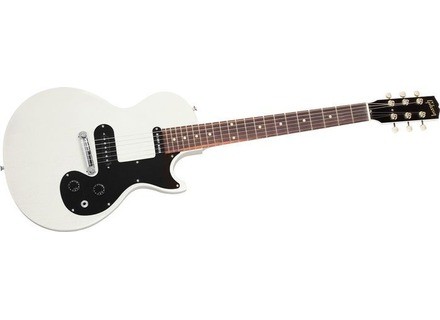 Gibson Melody Maker
4
i went to the nearest guitar center, saw it, tried it, but didnt get it. 1 vol, 1 tone, and input is on the top of the guitar, which is awkward. comes with p90.

i like the feel of the wood, its a different type of wood than any guitar you will ever see, the neck is fast, its very light weight, im guessing 10 pounds, the sound is nice and full when distorted on a crate amp, the clean channel is pretty striking and clear, while i was playing the neck, it was easy to push down the strings, and easy to move up and down the frets, its well made gibson.

its too small, its like the size of a les paul but what makes it even smaller, the body is thin, like a little more than an inch thick. which makes this guitar a bit small for me.

the condition is good of course.

the melody maker has a great sound over all and good feel when playing, the neck is just fine, its very very very very very light, easy to bend strings, and its colors are satin red, satin black, and satin yellow, i dont know why its satin but i guess they just make the colors looks a little more darker, when i first picked it up, it was nice, but after a lot of thought, i thought it looked fit for children even though the sound is gibson quality. over all pretty good.

Gibson Melody Maker
4
Gibson has really owned a large portion of the market with there great sounding and rich volume guitars such as the Explore, SG, and especially the infamous Les Paul. This is basically the cheaper version or junior version of a LP guitar. This guitar is shaped like a LP and has that familiar tone and ring to it. This guitar features a single coil pickup which is unusual to many of the models that Gibson guitars make.

This guitar sounds like a LP guitar because of the shape first of all but also the wood combination that is used throughout the construction process. This guitar has a nice rich tone but it has a cool single coil quality to it that makes it a very different sound than I am used to in the Gibson instruments. I am used to that thick Gibson sound and this is more of a focused tone that has a little beef behind it. Tye sound could use a little bit more beef and I think a pickup replacement would be in order with this guitar. i would suggest getting a nice boutique single coil from another manufacture's and sticking it in there to get a better overall tone with the instrument.

The price of this guitar is very nice. You can get a great sounding American made guitar for right at around $450 which is stellar price. Overall, this is a cool guitar but in my opinion it is not a main stay guitar. It is not going to be a main guitar for most people because it just has that unusual tone that most people I think are unfamiliar with. This is a very less expensive version of the true Le PAul guitars but it still has a wow factor in my eyes that appeals to me.

Gibson Melody Maker
1
In 2007 Gibson started putting out a new version of the Melody Maker. The 2007 version has 2 single coil pickups on a thin slab of supposedly mahogany wood. It has a 22 fret mahogany neck with a rosewood fretboard. Dont expect any binding whatsoever. It has an unusually small headstock that looks like it would be more suited on a banjo. It has a large single ply pickguard where all the electronics are mounted. The output jack is mounted perpendicular to the body on the single ply pickguard which is a problem because any lateral force on a cable plugged into the jack may cause the pickguard to crack. This is why most Gibsons have the jack mounted into the body wood itself even if it is perpendicular to the body. The guitar has a single tone and volume control and a 3-way toggle switch pickup selector. The guitar has a simple wrap around bridge probably made from aluminum. There is no adjustment on the bridge for strings so good luck if you are having a hard time getting your guitar intonated. The guitar has one of Gibsons faded finishes. Gibson started doing faded finishes to save money. They are pretty much a painted guitar without the final clearcoat on it. This means the finish is unprotected and will easily come off the wood. Some people who like the relic look will like this others will not.

These guitars come with Gibsons 50s style neck profile. The Gibson 50s style neck profile is commonly referred to as the baseball bat neck profile. It almost feels like you are holding to Ibanez necks in your hand. This may make it hard for people with smaller hands to play the guitar. The fretwork on this example was not very good. Gibson has been hit or miss on the fretwork of their lower end models lately. I would wager to bet most Epiphones have better fretwork that this guitar. Due to the body being so thin the guitar is very light which may be good for some people. It does not feel like a quality or solid guitar in your hands.

Gibsons are known for their big fat tones but apparently they forgot that when they designed this guitar. Due to the thin body and low quality wood the tone is likewise as thin. The single coils are thin and tinny with an almost painful high end sound to them. They are also very noisy. The guitar is very jangly sounding. This is not what you would associate or typically expect from a Gibson guitar. The sound may be usable for some types of country music or maybe punk rock.

There are an infinite number of foreign made guitars that are better than this Gibson. This guitar frankly feels like a toy and sounds like something you would buy for a 5 year old at Wal-Mart. I really do not know why Gibson would put their name on something like this. The street price on these guitars is around 500 dollars and frankly that is asking too much. Gibson is hurting their brand image by selling something like this. This is clearly for the people who just want to say they own a Gibson and dont care or know what a Gibson is supposed to sound like.

Gibson Melody Maker
4
(Originally written by micka78/translated from Audiofanzine FR)
- Where was it made? (USA, Japan, Mexico, France...)

- How many frets, what kind of pickups and what is the pickup configuration?

One volume control and one tone control.

- What kind of neck?

- Is the neck comfortable?

Yes and no! I'll explain myself: when I first tested it at the store, I found the neck rough because of the lack of varnish but after having playing it some time I now find it pleasant.

It's ok. The guitar is rather light so you can allow yourself some acrobatics on the upper frets, but it wasn't really conceived for that purpose.

I had never had such a light guitar before...

- Is it easy to get the right sound?

It depends on your setup. Personally, I got a quite fat, metal sound pretty easily and also a crunch sound. But I don't really like the clean sound.

- Does it fit your music style?

Yes and no! It does the job fairly good but I needed more versatility.

At home, I use small 15-watts Fender and Vox amps. It is more than enough for training. I also used Line6 Toneport UX2 for demos. For rehearsals with a band I generally used a 100-watt Marshall or my 200-watt amp and I found the results really good.

Good versatility for distortion but the clean sound was quite disappointing. But it's a matter of taste.

I liked the idea of owning a Gibson (even an inexpensive one). For a small price you get a guitar made in Gibson's Nashville factory. It's much better than its worthless Asian competitors. Thumbs up to Gibson for manufacturing this model again.

No because it was love at first sight with this model.

Excellent. It's great to own a US-made guitar for such a price! It's perfect for beginners but also for enthusiastic musicians and semipros who will most likely customize it (I wanted to add a mini-humbucker). Important thing: Mount straplock pins because the original pins are really bad. The guitar can easily fall down.

I sold it and bought a Gibson Les Paul. But if I ever have enough time to customize a guitar I think I'll get it back
Did you find this review helpful?yesno
»
Read the 30 user reviews on the Gibson Melody Maker »