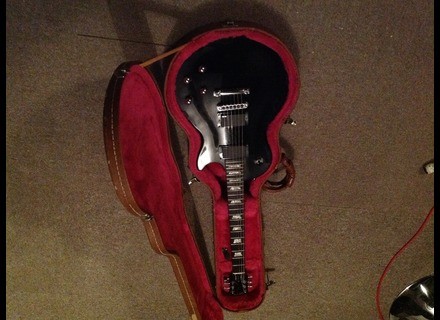 antho266's review (This content has been automatically translated from French)" A guitar that is aging very well ..."

The handle is a treat, even if some find it too big ...

One change: replace mechanical origins by mechanical grooving (this is the bomb !!!) ... mechanical origins were very cheap. They anyway pétées when my guitar was a gliding flight on stage during a concert ... good because once changed, it was not the same !!!

The neck is really nice if you like beefy sleeves (if not must be an Ibanez !!!) ... the biggest problem of this guitar is its weight ... after some concerts I sometimes have trouble shoulder !!! good but the sound is so good ...

It's been over 20 years that I play ... I did never part !!! must get into the habit of playing with volumes and tones but once found your sound is really good ... it leaves a lot of possibilities, which complicates things but in the end it's not so bad. ..faut spend a little time, that's all ...

This guitar sounds very typical fat and rough ... wish ... of course if you play the pat Metheny, it may not do ... though the neck pickup with the tone set correctly also reaches out jazz sounds ... sound like a benefit to those of wes montgomery only to those of Pat Matheny elsewhere ...

I play a Marshall JCM 900 dual reverb the same time ... although this amp is sometimes criticized for its sounds a little too aggressive in the treble, it fits perfectly with my guitar ... the also requires a little time to find the right settings ... but once found it is the bomb ... feel free to fiddle while that !!! do not stop to notice that you say, "it's been two months that I play with, not what is rotten ..." takes time to tame these beasts !!!

I played very little before my gibson guitars: a yamaha strat and construed by a friend with gibson ... it was love at first sight on !!!

What I love most: the handle which is perfect for me ...

Very good value for money ... After 20 years it did not move without making a single stop in the luthier ... not even a setting sleeve ... I checked last year and no worries ...

I do it again this choice without hesitation even if faillait to € 500 more !!!