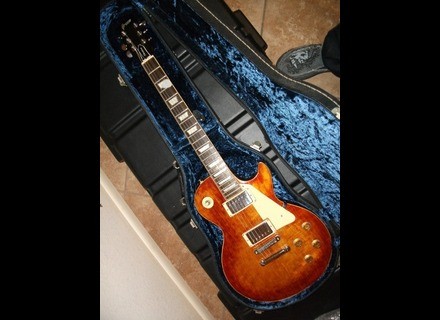 Juni41's review (This content has been automatically translated from French)"The Holy Grail for collectors of Greco ..."

Vintage Honey Burst finish no picture I took can not really show its beauty. His appearance "3D" changes depending on the orientation of the light!

The neck is C shaped, incredibly thick and comfortable.
Among all replicas Les Paul made in Japan, is one whose neck is thicker.

22 vintage frets 2 humbuckers Maxon DRY Z!
These pickups are the most sought after in the world of the original Gibson PAF!
If you do not believe me go and see the prices at which they sell on Ebay.
Over 500 dollards!
And because these microphones are famous for reproducing the "TRUE" his vintage Gibson 1950 ... And I can tell you now that it&#39;s absolutely true! O
All other Gibson Les Paul and other guitars made in Japan that I&#39;ve tested so far, I have never had this particular sound ... THE sound is really vintage Gibson! : D

This is a perfect replica of Les Paul 58 &#39;.
Indeed, in 1979 Fujigen Gakki (the manufacturing plant of Greco) has succeeded in obtaining original Gibson in 1950 and has successfully reproduced much more accurately at the time that Gibson (Norlin Year) and even today ...

These models, perfect copies, have also been declared illegal ("Lawsuit") and Greco has been repeatedly threatened legal action by Gibson, because of the perfect resemblance of its models.

The violin is simply amazing.
Much better than any Les Paul Standard that I may have current hands.
We often compare this guitar with the models "Historic" Gibson to give you an idea of ​​the quality ...

It&#39;s simple ...
I had never even played a round as enjoyable to play! (And yet I have already had two Ibanez ...)
The thickness of the handle is really big, probably bigger than a round of 57 &#39;but having played only handles about 58&#39; / 59 &#39;I&#39;m not sure ...
I already had a lot of Greco hands, like EGF850 example, but the handle is actually the thickest that can be found throughout the range.
The bends are easy and incredible comfort.
Play on this guitar is a pure delight.

For the rest, and although I said earlier, this is a perfect replica of Les Paul, nothing more.
Body shape, size ... everything is strictly identical to a Gibson.
Even the head "Open Book"!
Note that mine is 4Kg hair cell but I&#39;ve seen other EGF1200 lighter ...
After all, these are guitars made entirely by hand so I think it varies.

Not too much trouble to access acute ... Finally no more than a Gibson Les Paul after all it is a replica. The treble is not as accessible as on a Stratocaster must admit! XD

Level sound is simply amazing ...
I had heard a lot of legends about the famous "DRY Z", and I am forced to conclude that they are real ...
I never had a sound as close to what you can hear the songs played by professionals ... And this without any digital effects!
I never had a guitar with a sound as close to Slash, Gary Moore, Zakk Wylde, etc. ...
In fact, if I had to register a component, I think there&#39;ll have very little work required during assembly, and virtually nothing to correct the line of the scratch ...

Exactly what I was looking for, and what I was dreaming since long.
Yet I must admit I always liked playing on Stratocaster, but his level, I always found that nothing gets as good as distortion humbucker in a Les Paul. I&#39;ve always been very frustrated with Strats, but I will never stop playing with so far ...

I think the fact that Greco is still a brand little known outside of Japan is a real advantage.
For the moment the prices are really more than adequate in relation to the quality of the instrument and sound.
But I think it will not last forever and I&#39;m sure one day the Greco EGF1200/EGF1800 will sell at prices comparable to Gibson ...

Me? Like the good old vintage distortion, overdrive, metal!
While the Start is not for me lol.
But I am also very open to all types of music when I play a bit of everything.
Level I play on Marshall amp. (Ba hey like everyone else right? XD)

I do not hate any thing in this guitar.
Otherwise I would never spend 2750 euro in! xD
I do not blame him more than I already reproach to a real Gibson namely weight, access to acute, so ...
But we must know more than this if they really want to have sound so hot typed Gibson ... these defects are quickly forgotten ... Finally, as we do not play live ...

I routinely and on principle never to put the highest mark anywhere.
Perfection is not of this world ...

But today I&#39;ll make an exception! XD
Because I had never seen a violin so good, a vintage look to drool, a sound to die except the demonstrations I&#39;ve seen of Gibson Original ...

A Les Paul that sounds like a REALLY REAL Les Paul 1958 ... anyone?
So forget quickly the current Gibson models that will disappoint you every time you and seek out a EGF1200 "Sunburst Lady" you too! : D

Marf Fletcher (the good friend that I bought this beautiful guitar) www.japanguitars.co.uk will be happy to welcome you home (in France) so that you can try these guitars. He has an impressive collection including several Gibson Historic allowing you to compare yourself "Made in USA" to "Made in Japan" ... and realize how much better they are! P

Although these models are unfortunately almost as rare as the first Gibson then he must be patient.
From what I understand, we are probably only two in France currently possess ...
But patience always pays no?