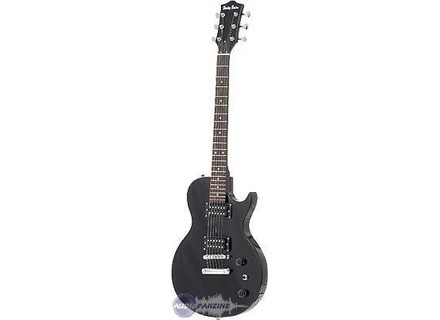 KoalaMan's review (This content has been automatically translated from French)

I can not say much is my electric Premire, but is comfortable playing plutt ...

Just over rglages t would be welcome, but hey, it makes a lot dj.

Plutt good balance, it has the same right inconvnient of Les Paul in ergonomics.

The slecteur plays its rle, the three main sounds are quite distinct.

At the sustain, it's adequate, no problem the above!

I bought it because I needed a component of a sound of guitar distortion, and those I was in modliss did not suit me.

The sound is in all typ plutt distorted sounds, do not have a clear esprer stratum with this instrument.

I play in a DIY Tube Screamer, through my amp Marshall AS-50R (electro acoustic amp, but versatile enough), or directly in DI in the console, adding the effects later in the squenceur.

Rarely do I lower the treble below 10, I find that the sound is often a bit dark, but it is doing all the same trs well!

I was afraid to have an instrument for the price of dcoration, but it is a true musical instrument. Obviously, do not ask to have the sound of a Gibson, but it makes all the same great service, and beyond, I can do it with iron toy welding torch and without fear!

Ngatifs any two points of the same: it is non-RULES book, so I'm not either sr IDAL instrument for someone who started music (I do for a while, so I have some ear).
Then, pulling the strings provided is really too weak, which had the tendency to make false, despite the bridges rglage fair! 11-52 passes, it's nickel, not blame him.

I recommend this instrument for musicians, who, like me, need an electric guitar sound, but do not want ncessairement prodigious amounts of money. Forcment not advised for beginners, but once started, is that happiness!

I prcise that the notation is that I put Obviously related to the price of the instrument (89!)

mirroire's review (This content has been automatically translated from French)

Harley Benton L-200
2
then it is a Chinese.
an easel type tun o 'matic it seems to me
sleeve had C
22 frets, double humbukers
a master volume, tone masteur, a 3 position selector

then the handle and nice, really, for a guitar in this range we pass the DeSUS not too bad, the frets a little when acrocher same, especially to the acute.
it is not too heavy, it peus wear it without worry just a little imbalance which causes hair to fall forward. overall ergonomics and drinking.
access to the treble, it was still a corse as a les paul so ....
n'obtienys is not very easy to have a good sound whipping a peus well rgl all the amp included to fit the miss.

it is well suited to my style of music, hard rock punk, heavy metal riff or requires powerful and heavy,
sound, is the alalala that much of this play, frankly bin for that price, I am very happy
The clean is very very vrement flat and nothing comes out, no slamming vrement a very low output level,
the drive, the better it is, and even beacoup better, we feel that peus power in this cache miss, a lot of thunder
it's bold for those who love the neck pickup a drooling peus even when on the bridge that is the best, the sound is comprehensile, and quality. we feel the power. of course all this is said according to the range of this guitar
I play a Fender Frontman 212R with OD Intgr.
I prefer playing on the bridge pickup gives more power to her and claret.

I IT CAN BE USED for 2 years now.
before buying it I just try an Ibanez SA260 with Mount SSH6, but my mom who requires a budget that should not exceed 100 euros for my electric premierre, at the time was his money .....
. what I like most is that for that price is atractive vrement guitar in sound and ergonomics.
I do not like the finishes that at the beginning may seem simpa but remains a Chinese low cost, and after two years began to fall into disrepair that the currency selector knob cass ..... ......
With experience, I advise vrement for beginners who want to fuck 300 euros in a skyscraper resell it in two months because he will have enough.

Denki's review (This content has been automatically translated from French)

Harley Benton L-200
5
Purchased from thomann, this guitar has 22 frets, it has two twin microphones, there are two knobs (tone and volume) and a selector for a three-position bass sound in the treble, or both.

I found that the stick was quite nice to play and that he was well in hand.
She still weighs quite heavy, you feel the weight of the craft! But it's a minor detail. Access to acute is simple, it moves well on the neck.
For sound I strongly advice to have a distortion pedal or another because the overdrive of the amp HB-20G sold as a bundle not worth much.

I use the HB-20G amp and a BOSS DS-1, the sound is perfectly suited to my style (punk, metal).
I love the powerful sound that I'm going out with my distortion so I can play just about everything. There's not really that I hate.

I use it now for about 1 ½ years. I tried two three other models like Ibanez or Yamaha and I think the price / quality ratio is really good but as I said before, to have a good sound you really crack a pedal. One defect is that the low E string rubs against the frets so it sizzles a bit but nothing serious. With the experience I would do without a doubt this choice I am very happy with my purchase especially when you see the price!