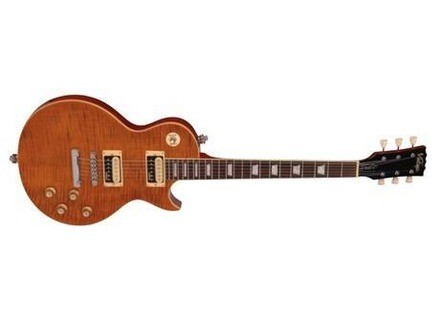 slash89113's review (This content has been automatically translated from French)

60 handle rather like a gibson / epiphone
it is heavy as a gibson 4.5kg 2 hours together you know what is!
each access to an acute ben c les paul or what you have to play like slash.
the sound is really good is obtained easily slash its close but not that you can play for other styles.

as I diaita above you get to have a quick slash of the sound are clear are also amenities of a good chorus c went to Paradise City or knockin on ... I am plugged into a Fender Super Champ XD, pod xt live .... I cover a wide range of sonnoritées.
I play quite a bit of blues c nickel, rock / hard rock it's going to be, it goes pop, metal c c is feasible but is not the best for ca ......

I have the past month and I frankly do not let go of c over an epiphone J had a lot of guitars and I've wanted to try the brand and vintage declic was the edition of v100afd being a fan of slash only point preoccupation me during my purchase qulle c n was not sold in France ordered the coup on the net and you can not see the real guitar before but bought the ca c well.
I adore the look of this guitar and especially the sound, it is proposed a super value for money I do it again this choice without hesitation, and even on other models of the brand, because when you look at the selection is great especially the icon series