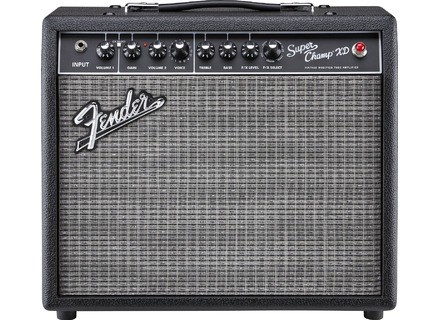 Fender Super Champ XD
4
This is a hybrid guitar amp- part solid state, part tube, but different from most hybrids, in that it actually has tubes on BOTH the pre-amp and power-amp sides. The 12AX7 tube on the pre-amp side is not for pre amplification, but at least, it’s there! Two 6V6 tubes on the power side mean you can get power tube overdrive, if you either crank the amp, or run a speaker attenuator in-line- this amp has a jack and plug setup for the on-board speaker, so no need to install a jack.

This amp is advertised as 15 watts, which is probably accurate. Two output channels- clean and “effected,” with all the effects produced by a digital signal processor, or DSP. Amp models are sampled, and reproduced by the DSP, too. Connections include a single instrument input, headphone, and a single speaker out, which in addition to making it easier to run an attenuator, also makes it easier to drive a separate cab- two speaker outs would be nice, but are not provided.


The 16 amp models are all quite good, with the Acoustosonic and Champ models being among the best here. Other models like Jazz (after the Roland Jazz Chorus amps) and British are nice to have, and adequate, but I find only about half to one-third of the models are different enough to be worth using- there is considerable overlap between one amp model and the next. Effects are good, too, but limited, in that one can not have, say, reverb and tremolo at the same time. Some effects can be dual, but not all. Although parameters of all effects are not continuously variable- you only have three tremolo speeds, for instance- the level of the effects can be controlled- having control over only one parameter of an effect is just silly, so it’s nice to have both here.

The manual is easy to understand, and useful. I printed out a copy of the page that list the amp models and effects, and put it in the back of the amp, for quick reference.

With it's own on-board effects, I don't feel the need to use many pedals with it- I use a wah pedal, and if I want both tremolo and reverb, I gotta use a pedal for one or the other. The clean channel is nice to have, for the usual switching between clean and distorted- one gripe I have is Fender uses propriatary foot switch circuitry, and you must buy different foot switches for different Fender amps- so there is an additional $40 expense, as the foot foot switch does not come standard with the amp.

Changing the stock ten inch speaker to a Eminence Ragin Cajun speaker is a popular mod, but I found the improvement was modest. In my opinion, this is not a cost-effective mod. Having that blue-framed speaker peeking out from the cab is cool looking, though.

This is a clear step above most practice amps, and can be gigged with if things don't get too loud. It does have a line-level out, so you can easily go to the board or a slaved amp with it's signal for more volume, if needed. Given it's versatility, the value is here. I've played many amps, including more than my share of little practice amps and "club" sized amps- this one bridges the gap between both. I would buy this amp again, and recommend it.
Did you find this review helpful?yesno
»

Fender Super Champ XD
2
I hate to say it but this amp is below average at best. The idea that it can to effects and have 16 different voicings is ok but it just doesn't sound that good. This is labeled a hybrid amp which means it has both tubes and solid state digital operation.

The voicings unless are cranked by the gain have any usability to them at all. I don't like how this amp has so many voicings but doesn't say what the voice is modeled after. Since it dramatically changes when you switch it around.

Not really a fan as I mentioned above. The tone is mediocre at best and can be achieved in better amps out there. To me it doesn't really matter what guitar you use it with it just doesn't sound like a tube amp should.

I also don't like being stuck at the midrage that is natural to the amp. Not having a mids control knob is like not having presents on Christmas morning. The mids are the best thing about a midrange instrument. Not being able to control them is a waste of time in my opinion.

This amp is a big pass for me. I don't like having just treble and bass for control knobs for EQing and I just flat out don't like the sound of the amp. At new these amps come in at around $300. To me that is kind of high for this thing sounding the way it does.

Peavey's and Roland at the same price point sound night and day better. I like Fender and I love Charvel but this is a big ole miss for me. I do not recommend this amp.

Fender Super Champ XD
4
This is a tube combo amplifier made by Fender. It is an update of the Classic Fender Champ model that was standard back in the days of old. It introduces some different amp sounds and a solid-state overdrive to the tube amp, so it is a hybrid of sorts. The clean tone, however, is all tube. There is one 1/4" input. There are two channels with a volume knob for each. The dirty channel also contains a gain knob, and a voice knob, which switches the tone between many different settings. There are two tone knobs (bass and treble), as well as an F/X level knob, and a knob to select F/X.

Getting a good sound might take a little bit of time with this amp, but I"m sure there is something you'll probably enjoy. It's just a matter of remembering which voices work best. Keep in mind that the best tones with this amp will be the ones closest to the original Champ. There isn't much need for a manual, but it will certainly be clear and useful if you want to take a look.

This amp is relatively easy to get a good sound with. It's better than most modeling amps, for sure, but I find that it is relatively weak in comparison to a full-on tube amp. The effects are also kind of lame, to be honest. Te reverb is very fake-sounding, and not very useful. It doesn't have the great reverb of a Fender Twin Reverb. This isn't what I would generally expect from Fender. I would say that half of the tones are pretty awesome, Fender-style tones, and those tend to be the more in-your-face blues and bright rock tones. Once you get too rock-centric, and adding lots of gain, is where the amp starts to lose its flair.

I am a little disappointed with these amps. I feel like a real Fender Twin or a Champ is all you need for most people, yet Fender keeps making these amps with a million different sounds. The problem is that none of them sound all that great. Also, these amps break far more easily than a tube amp would. I guess this is what people want now, it's just a shame because most people could do a lot better if they just saved up a little more.
Did you find this review helpful?yesno
»

Fender Super Champ XD
5
The Fender Super Champ XD is a small guitar combination amp, designed for practicing, recording, or gigs in smaller venues. It's a 15 watt amplifier with real tubes and digital effects, unlikely pairing for sure. It also has sixteen different amp voices to choose from, which is essentially built in amp modeling. The amp has a single, 10" speaker and a 1/4" on the front panel for plugging in your instrument. In the back there are also 1/4" connections for speaker out (usually hooked into the speaker), a line out, and a foot switch jack as well.

Using the Fender Super Champ XD isn't difficult at all. Even if you're not too experienced with guitar amps, this one should prove to be pretty simple to use. The amp has two channels, the first of which is clean and the second has some built in overdrive. The first channel has just a volume knob, while the second has volume, gain, and contains the voice parameter which allows you to choose between 16 different amp voicings. The amp then has treble and bass control for both channels, as well as five different effects to choose from along with an effects leveling knob. I've never seen the manual for the Fender Super Champ XD...

For such a small amp, the Fender Super Champ XD is in no way limited in the possible tones it can achieve. As if the two separate channels wasn't enough, between the built in effects and amp voicings you really get a nice palette of sounds. The tone of the amp in general is much like any classic Fender tube amp, as it's got a super clean clean channel. The built in overdrive on the second channel isn't the best, but it's nice to have for sure. The amp voicings help to further this flexibility, while the effects to me are really just an added bonus. The effects that it has include reverb, delay, chorus, tremolo and vibrato. In general the effects are decent, but they're definitely nice to have!

The Fender Super Champ XD gives users a whole lot to work with in a small space and for an even smaller price! This is the perfect little amp for the beginner or intermediate player practicing at home. It would even be fine for someone more experienced, but usually the more you play, the more control you want. This amp is a great way for players to get their feet wet with effects as well, but I wouldn't buy this amp for the effects as I would view it as something extra here. The price is outstanding here, as for $300 US dollars you're getting an extremely flexible practice amplifier...
Did you find this review helpful?yesno
»
Read the 39 user reviews on the Fender Super Champ XD »

Listen to the 5 audio files about Fender Super Champ XD »