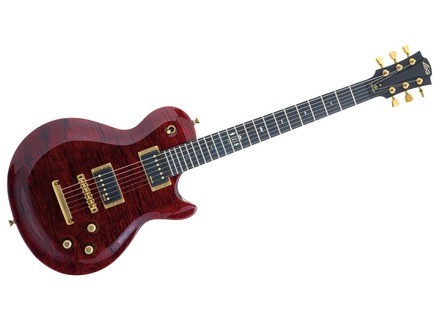 Imperator I3000, LP-Shaped Guitar from Lâg in the Imperator Master France series.

Lâg Imperator I3000
5
Made in FRANCE
Mine is Amber Shades and dated 2010 (color option if I understand) GORGEOUS!

Good everything has been said, see previous comments. Mine is equipped with Di Marzio (now with Seymour SH1 SH4, it seems). This was the point that made me hesitate before I start. I play covers of 60's 70's blues, rock, hard rock and I was afraid that the microphones are too modern and well: quenini! It's very musical.
I find it just a lack of progressivity on the tone knob but I quibble!

This guitar is a real pleasure. The handle is for me a real highway (well it is not an Ibanez course). I usually play on Strat and then slap: immediate grip, varnished handle that does not stick to your fingers (not like the SG 61 'reissue, quickly sold elsewhere), access to acute really well for a shovel size Les Paul. The instrument is well balanced, it sounds empty and we feel we do a good (very good) shovel. Once connected, the idea we have a guitar at this price point makes sense. It is full, the harmonics are beautiful, and say shit ah yeah still!
No doubt about the capabilities of this guitar to age.

I play in a band of 70's covers and reviews the standards of the time: Hendrix Led Zep, of Floyds CCR, the Stones The Who, Steppenwolf etc. .. This shovel is tailored for the Rock. Here is my config:

This Lag sounds with my two config and I must admit that I am overwhelmed. It's hot, creamy, whether neck pickup or bridge. split micro done his job, but does not equal the crystal clear sound of a single microphone or Strat Tele. However, it is more than adequate and is very very musical and well defined.
Are extra crunch, and lead has a sustaaaaaaaaaaaaaain endless.

I got on (happy) exchange 3 weeks ago and yet I was not party to Lag.
I wanted a Les Paul at the base. This shovel was presented to me and I fell madly. Exemplary finish, color Amber Shades gives it a great side class all combined with a disconcerting playability.

I could not have me new offer. the previous owner had paid a little more than 2500 euros. But the price or I had was a real bargain!!

I had an SG 61 'REISSUE an artist signing Eric Clapton Strat, a Duesenberg Starplayer, a classic 60's Strat player and this is by far the best shovel I had in my hands. I've never had however Gibby Les Paul Standard, PRS Custom so I can not compare. Now to read the various comments on the quality of approximate Gibby produced in series (not custom shop models or supreme), I think I made the right choice and then shit: Cocorico!
this guitar made in France proves that has very good shops that can compete with the Americans Giants.

I only regret that a guitar of this level is not equipped with a lock held mcaniques agree any evidence. The Gotoh precision sontOK on paper but I had a problem with mcanique dfectueuse, hence my note 8 only.

The handle is trs enjoyable play, Access in acute fairly easy (as a les paul in fact).
This guitar is well balance, more agrableen standing as more than a les paul lgre.
Splittage of the two microphones provides a large variety of sounds which makes the guitar very versatile.

For sound, this guitar is absolutely outstanding, especially for heavy distorted sounds. It possde sustain remarkable. It is highly recommended for rock, hard rock and metal.
Comparative tests in the store, it leaves my humble opinion far derrire number of competing brands prestigious trs.
In his clear and also DiMarzio are doing well and give her a very prcis.
In micro splitter gives her an edge over most etencore Dfine, which rapprocheun peude single coil pickups (Start type). It can also be used to softer musical styles (blues, pop rock ,...).
I utiliseavec a branch on POD X3 live sound system and it works .... trs trs well.
On a tube amp, I do not even speak.
I put 10 because the scale does not go up but MRIT 11 or 12.

I use depuis5 months.
What I like most is its exceptional sound, its look trs rock, due to its versatility CHARACTERISTICS microphones and the possibility of the splitter.
What I like least are the mcaniques chosen by LAG that good yet but reputable agreement is holding my sensperfectible. MODELS t have the lock for this prfrables MODEL premium.
I tried many other models before acqurir: Gibson Les Paul, SG, Musicman Luke, John Petrucci ... but the comparative test does not call my ears.
I pay 2200 euros which is a good quality prices, given the class of that guitar.
I would do without this choice hsiter.

TheAxe's review (This content has been automatically translated from French)

Lâg Imperator I3000
5
Hello and thank you for reading

Second flight and I have this guitar for 6 months in the same configuration as the previous guitarist namely:

My opinion is gnral: First of all this guitar is beautiful, original and it really is a unique guitar, because the fungus grain of the wood does not obviously twice the same ...
Cot's it like, awesome. I have long used the Gibson and it is largely the comparison.
One regret: I think this guitar has the mechanical locking does not seraien unnecessary ... e 9 is due to ca ...

Channel impeccable, frets smooth and good accuracy, although on my first it was not the case. Lag me immediately changed and I admired the seriousness and rapidity of manipulation. Lag and thank you to my dealer. I use a mesa lonestar and I left the equalization of my SG and it sounds nickel.

I play blues rock, or rock, pretty hard, I'm a fan of Pete Townshend to give you an idea of ​​his that I like ... Well, this sounds Lag fire of God ...