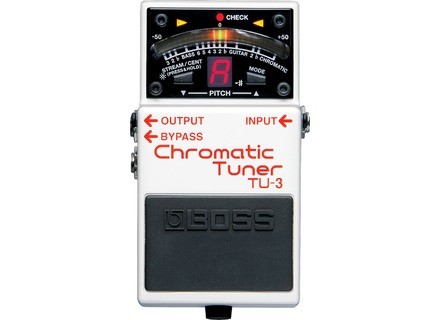 Boss TU-3 Chromatic Tuner
5
In the days before guitarists could step on a pedal and tune their guitar on the fly, their best option was either an expensive model from the Peterson 400 Strobe series, or the small needle-based Boss TU-12. Neither were a very convenient option for a variety of reasons. The strobe tuners were difficult to read unless one was educated in how to use them, plus they were bulky, and setting them on top of your amp would still have you turning your back to the audience to tune your guitar.

The TU-12 needle tuner was an improvement in simplicity and size, but compromised in accuracy. Another downside to these tuners was they didn't have the capability to mute the guitar signal coming from the amp while the player tuned. As a result, the unpleasant sounds of a guitar being tuned could be heard by everyone.

The Boss TU-2 revolutionized stage tuning by placing the tuning solution on the guitarist's pedalboard where, with a step of the foot, mute their guitar signal, and tune the instrument utilizing a series of LED lights and Digital note readout. Pretty soon the TU-2 became standard equipment in every guitarist and bass player's pedalboard.

The TU-3 was designed to be everything players had come to love and expect from the TU-2, while addressing common complaints about the TU-2. Boss succeeded beautifully in making the classic TU-2 design even better.

All of these improvements are housed in the same familiar aesthetic and functional design of the TU-2. It still sports the mute/bypass jacks, mode change, and stream/cent switch of the TU-2. With these updates, The TU-3 is destined to become the new standard in pedal tuners.

I was a longtime user of the TU-2 and when I heard the TU-3 was coming out I sold my old TU-2 for $45 and upgraded to the TU-3 for $80 total. I believe I bought it through Guitar Center's website when they had a special discount coupon.

I like that the unit kept the features I loved from the TU-2 like the sturdiness and only improved up in with adjustable brightness and better tuning accuracy.

There isn't anything I do not like about it. Boss did their homework and put out a sturdy, amazing pedal. Some people complain that the pedal isn't true bypass and that buffered bypass is not the same. I believe I have a decent ear and I do not notice any signal loss whatsoever.

Rock solid! You could throw this off a cliff, then go find it and take it to your gig. The battery life is great too.

Bottom Line if you need a pedal tuner I really would like you to consider this one. There are fancier tuners out there, but like it's older brother, the TU-3 will soon become the industry standard in guitar and bass tuning.

Boss TU-3 Chromatic Tuner
5
This is the updated version of the very popular TU-2 Stompbox tuner. It has several different tuning modes and also includes a power supply capable of powering up to seven other pedals.

I bought this tuner because I have recently been using the Behringer pedal tuner. I wanted something more accurate and also wanted something that would pick up my low E string better. I like Boss and I had borrowed a TU2 before but just couldn't bring my self to spend $100 on a tuner. I am very glad I did.


The tuner is much more accurate than the Behringer I had been using and it also seems to be a little more accurate that its predecessor. It has brighter LED's than the previous model which is great for tuning outdoors when you need them to cut through. There is nothing worse to me than tuning with your guitar coming through the PA in a live setting. When going from drop D back to E or visa versa, the tuner picks up the string immediately which makes for speedy tuning. You can also choose how bright the LED's are which is nice if you are running on battery power, if you don't need them bright, you can turn them down.

I don't really have any negatives, I still think $100 for a good tuner is steep, but if thats the price for a good tuner, so be it. I also wish there was a way to keep the store display running while you aren't tuning.

It is in the Boss case so its tough as nails.

If you need a good tuner for a live setting, this is the one to get in my opinion. Don't skimp on the Behringer, it will only raise your blood pressure.

Boss TU-3 Chromatic Tuner
5
The Boss TU-3 is the newest model of the Boss tuner foot pedal. For the most part, it is very similar to Boss TU-2, it's predecessor, but it does have a few new features that help it stand out just a little bit. For those who don't know about this line of tuner pedals, they have become pretty much the first choice for a tuner pedal for both professional and amateur guitarists. I'm a big advocate for them, as the TU-2 is something that I've been using for a while now. Just about every studio that I've worked at has the TU-2, as it is simply a well designed model, which extends completely into the TU-3. Like the TU-2, the TU-3 is a chromatic tuner, consisting of a 1/4" input, a 1/4" output and another 1/4" bypass output. It can be powered by either a nine volt battery or power supply, and with the power supply and optional daisy chain, you can power up to eight other guitar pedals that need nine volt power. This is perhaps the best feature, but the easy to read and versatility of the tuning options also adds to it's prestige. The LED display screen on the TU-3 is improved from the TU-2, as it is brighter and easier to see, catering to those are using the TU-3 for live shows. The TU-3 can indeed be used for either live shows or in the studio of course, and is equally as useful in either situation in my opinion. However, the improved lights and display screen do make it easier to see in the dark during a show. The pedal will mute when you have it engaged, and there are a number of different modes that you can choose from. In my opinion, there isn't too much of a different between the TU-2 or TU-3, so either way you go you can't lose as long as you go with one of the two!

Did you find this review helpful?yesno
»
Read the 26 user reviews on the Boss TU-3 Chromatic Tuner »

Published on 04/08/10
Boss announced that the TU-3 Chromatic Tuner an updated version of the pedalboard standard TU-2, is now shipping.