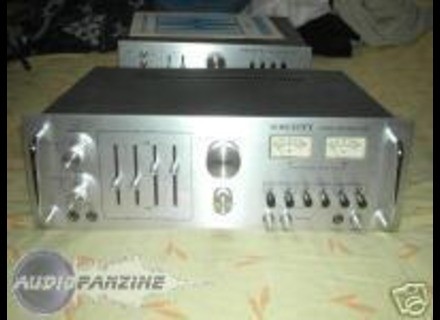 A 436, Hi-Fi Amplifier from Scott Sommerfeldt.

madkevil's review (This content has been automatically translated from French)

It has given me 2 years ago, the receiver was in a good state but the former owner was making a fuse itself (with the help of ashes among others), which in turn has lead the problems ..... The right lane with a lot of breath, the left not walking any more ... and some Circuit had cram ...... For repairs I had 100 euros, but for this amp ca I was going to blow!

The sound has the oldest, fiabilitle look, the large number of adjustment for an amp (loud, filter), personally I love everything about this amp .... except the weight lol

Yes I have tested a lot of old amp, most do not we Satisfied too much except that Scoot and another Hitachi 504L.Le sound of Sr-year old School not please as new sony amp for example. .....

Price is slightly elevate, aujourd'huit for that price, I was low-end amplifier or hi-fi .... Given the soliditer, the price is much lower compared to the qualiter

I think not, I would go in the range above ... Scott dcidement a very good company (which has the flow, because we hear talk to me), and this amp widely me Satisfied .....
Did you find this review helpful?yesno
»

Scott Sommerfeldt A 436
5
This amp is out there more than 35 years.
It is a bit dated anyway.
Mine is still at his post, although the knobs spit a little past ten years. I do not use the amp part (because it can be accessed directly without going through the preamp and tone controls).
This function satisfies me even now.

bigjake's review (This content has been automatically translated from French)

Scott Sommerfeldt A 436
5
It is an old amp that my father must have in 25 years.
preamps built
2x60W
stereo
Hi-Fi

the sound is really good even when you go up "a little" is not easily add sound rooms as a dining hall with a high school writer 4m ceiling it does not budge. daccord good it is large it is heavy: so what? it is really very good.
Did you find this review helpful?yesno
»

Scott Sommerfeldt A 436
5
Amplifier transistors designed by American inventor Scott hi-fi in 1949 and the first tuner digital.Fabriqué 1976 to 1979.Bonne qualité.Tout walk despite the age .2 X 42 W RMS into 8 Ohms.Très good tone and definition . preamp and amp séparés.Réglages effective and good puissance.Il are also two entries micro.Vintage worth the price argus coup.En hand is a mystery because I've seen for sale of € 104.00 to 300.00 €!
Did you find this review helpful?yesno
»
Read the 5 user reviews on the Scott Sommerfeldt A 436 »