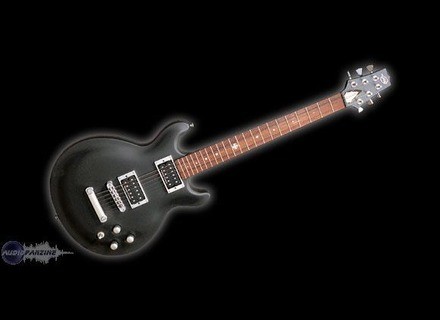 Roxanne Standard, LP-Shaped Guitar from Lâg in the Roxanne series.

Lâg Roxanne Standard
4
The Lag guitars are a good alternative to Gibson Les Paul or Paul Reed Smith guitars. They generally feature mahogany wood for the body and in the necks along with rose wood fretboard. Many of the wood combinations and overall cosmetics of these guitars really have an influence built right into the Gibson product line. Body shape is somewhat of a mix between a Ernie Ball guitar Gibson SG guitar. You're getting get a very similar tone out of this instrument as you would a Gibson Les Paul guitar or any other Paul Reed Smith guitars. It's a pretty standard tone and there's nothing too spectacular special about this instrument.

These guitars are produced in France and they have a decent feel and tone to them them. They also have a similar resemblance to a Gibson 335 guitar but it is smaller body it's certainly a solid body. This guitar has a more comfortable back in my opinion and you can reach the frets of the higher portion of the necks much easier than you want a Les Paul guitar. So in essence it has a lots of inspiration coming from Gibson SG guitars. So if you play this guitar was a good high gain amplifier can you get a kick good thick tone that will resemble any other Gibson instrument.

These guitars are very hard to find and if you're looking for this exact model then you probably would have to buy it online. They don't come very easily nowadays because they have discontinued this model and Lag has been producing other models that facilitates this position. If this is something that you desire then the online is probably the only way to go but if you need something that's got to cover this type of tone than I suggest going with a cheaper pPaul reed Smith guitar or a studio version of the Gibson SG guitars. Ibanez also makes a decent sounding and very comfortable Les Paul style guitar as well. So those are some options other than this instrument

Lâg Roxanne Standard
4
Hello all.
So I would not stay on describing déjàbien explained in other post (pretending inside P).
If a detail often overlooked in the descriptions (especially the factory), the weight! Here we are at 3.8 kg (weighed on a scale traditional).
Provide a leather strap 6-7 mm.
And that mine was in 2000 (if I believe the serial number on the purchase guaranteed provided).
In addition, I would have liked another Tone knob. By a microphone. How about a volume knob "General".

Note: Despite the good reviews that I do, I do not bring myself to put the notes "perfect". I compare many points with my Les Paul Custom 70 &#39;which, necessarily, than on the point. Then there are the staff appreciation.

We are here on a guitar touches everything. And it surprises already under.
At first glance, it looks like a miniature 335, full (solid body). With rounded to the Les Paul. Size approaches a Dual Jet (Gretsch).
And recall a red SG.
Accustomed to handle D, here I think we are closer to the C. In larger still. A little wide for my hands, I use less position "thumb over". The handle is not "fast" in the sense of Ibanez. Provision of limited over-acceleration and seek to bring every note. But that does not stop me to go solo "The Number of the Beast" smoothly. Furthermore, access remains a feast last fret.
Sitting position. The guitar back. Annoying.
The selector also microphones. It is far! Difficult to change quickly in a split second.

It was! the thick of it!
The sound is atypical made. In the sense that means that we want to hear.
The instrument is handy at the highest point, since many things depends on what you put around and adjustments granted on the guitar.
To test this, let&#39;s say I&#39;m plugged into a Peavey Studio Pro 112 (equivalent to today bandit transistor). The advantage is that this amp provides settings: vintage, modern and gain hight. No pedals.
Clean: Already, a distinct advantage over neck pickup position. It&#39;s round, warm and serious, but far from being "too" serious. For jazz, I prefer playing finger advantage for roundness. Or even to lower the tone and volume on the guitar so the strings less chatter (plectrum).
It Splitt and we offer a passage on "Mary Had a Little Lamb" for the party blues.
I find it still lacks sweetness to really claim shined in these areas. Partly because of Alnico V, which are quickly saturated the pre-ampl. Best of your more traditional instruments, Gibson / Fender.
Or change the pickups (Alnico II). In many aillor person spends on micros "Gibson".
Saturates / distortion: No comment, We are in the chosen field.
This is surly! But not as fat as LP. Its still very defined. Provided they do not push the max gain (but there&#39;s comes in part from the amp). For maximum definition in the solos, I splits the bridge pickup.
And that&#39;s where the positions are vintage and modern play their part.
In vintage, its crunsh well, without too much aggression. Perfect for play
of Izia, The Hive, Jack White, in short, knew vintage P Expect not to turn up the gain too, all the same, or lower the volume on the guitar. It saturates quickly.
And the more modern envoiler disto and from on the Offspring, Deep Purple, Ozzy, ZZ Top, Iron Maiden, etc..
Small details for Iron, I splits the two microphones in its simple to get this
Fendorien double.

Phew. His will, not too long? Lot to read, I know. But also a lot to say. : D
We spend little time on the instrument simply looking for sounds.
Do&#39;ll do just about the height of the microphones that find new sonic palettes.

Its been just a year that I have. And I think not having finished go around.
Overall, what I like is its versatility. No wonder she was a success. Halfway between vintage and modern, it overwhelms me.
I would have regretted it quickly saturates. Even clean, if not careful, his crunsh. It lacks warmth, compared to high-end instrument.
A good thing, we see the wood through the paint. This is reassuring as well
we see that there is really no knotted. The handle does not move and the strings either.
In made, compared to the purchase made (500 €) is the best guitar I have.
If you wanted a new guitar, or do you put into it, run on Ebay or Priceminister. Between 500 and 700 € it goes well beyond the instruments made in korean or mexican.
Unable to buy a new one. It is no longer manufactured in France. The 500
closest to it can not at his level. And it will cost more.
Also, I think, I hope, that with the success of Lag increasingly growing
it will eventually appreciate in value: D

Here, it&#39;s over. Thank you for taking the time to all (?) Read.
Hoping that his helps you in your choices.

the body and neck are mahogany, it is also stuck with 22 fret rosewood fingerboard.
In this it resembles an SG. Indeed, it has a Tune'o'matic, a Stop Bar and two humbuckers and split-.

The pickups are Seymour Duncan Jeff Beck in an easel and a 59 'to the handle, with a volume for each split, a general tone and a 3-position selector.

Excellent ergonomics, treble very accessible, it is a douclecut.

The handle is a compromise between too round and too late to specific Lâg or fender or gibson and is very pleasant.

The guitar is mounted is 10-46 but can withstand stronger ties.

She clearly sounds raw. Indeed, mahogany, mahogany over two humbuckers, sends here.
Guitar very responsive, however it does not sound bright, it's quite fit in it and it pushes the guitar to ensure the quality of his picking.
The pickups and split-let you add a little versatility, but, frankly, this type of guitar here is not used much, as have a guitar with single coils and more ...

Ideal for rock hairy, punchy blues, hard rock and metal of the 80s.

I use this guitar for 13 years, she followed me in a lot of styles but her favorite remains the "sends watts".

The value taken in 1999 was excellent, I can not speak to that of Lag made in France today.

wesontheflex's review (This content has been automatically translated from French)

two caches added by micro-maker then

Mache a little slow at first but got used to it, classic round profile
double cutaway handy
reasonable weight

Purchased its release in 2000, my first electric, I will keep forever!
even if it is not easy for a beginner .....
Did you find this review helpful?yesno
»
Read the 7 user reviews on the Lâg Roxanne Standard »