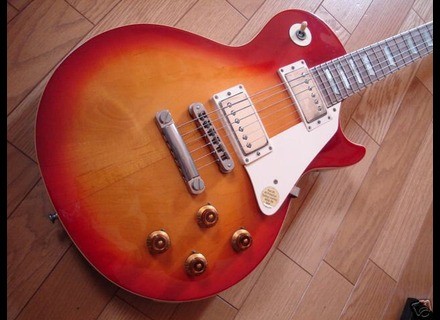 Very slim neck with a nice varnish.
Access to upper frets... It's a Les Paul but look at Gregor Hilden on You Tube, it seems he has no problem with it and what a tone!
Awesome ergonomics.
The sound depends on many things: pickups, amp, the guitarist himself, but this beast is ready to bite and to purr: the lutherie is perfect.

This guitar is conceived for blues and rock but it's also good for hard rock with an adequate pair of humbuckers!!
Hand-wired tube amp.
Every single clean or crunch sound is possible with the adequate pickups... the adequate knob settings and effect pedals...
I love its warm and round mids... the accurate low-end for rhythm parts... The neck is good for this.

I tested over 50 different models (Blade, Ibanez, Fender, Burny, Navigator ESP, etc.)
I wouldn't hesitate to buy it again.
Did you find this review helpful?yesno
»

coromon's review (This content has been automatically translated from French)" keep"

Light radius, comfort and sustain insured
not too thin nor too tight either.
ideal for me.

By purchasing I had the idea to change the pickups, just in case.
When I tried to dry (without plug) I heard the wood and the beautiful and resonant violin.
When I plugged in, I was delighted with the sound and I kept everything original.

My best Lespaul at any point of view.

Orville Les Paul Standard
5
Made in Japan by Gibson to counter the copies that were beginning to seriously overshadow Gibson ...
The only notable difference with a "real" Gibson is the key is rosewood instead of ebony in microphones and electronics are rigorously the same for both models by Orville Gibson.
In fact it's a gibson!
For the record those who do not know ORVILLE was the first name of Mr Gibson ...

The sound ???..... Deadly!
In addition, if you come across one with a long tenon, which is my case, there's a good chance she buries many "real" les paul .... indeed sustain is terrible, better than on my PRS custom 24 89 Factory Pre! Prices for a 3 to 4 times cheaper!
Short of the ball is serious!

I have been 6 months now .... I'm crazy! I sell jamma! and believe me the guitars you name it ....
Unbeatable value for money but ca may change as they began to be known and they do makes more ..... and they are rarer than thousands of gibson for sale.
I do it again this choice and I recommend ...
Only complaint ..... the weight .... Sami the gibson ...

EDIT 07/2009:
Still in love with the scratches ... I saw a few in past occasions, but here y 'have more and prices have mounted damn!
it is a great value, but they cost the price of a gibson now, is quality in the appointment?? (On gibson course!; _) <img class="smiley" src="https://fr.audiofanzine.com/images/audiofanzine/interface/smileys/icon_biggrin.gif" alt="biggrin" />

buissonDJ's review (This content has been automatically translated from French)

- Good grip with a well-varnished "rolling" even with perspiration
- Access limited to acute .. it is a Les Paul.
- The weight is comfortable sitting and the guitar is very well balanced.
- The sound with humbuckers ad hoc .. is just fantastic

Blues, Rock, Heavy ..
- Tube amp ..
- Everything is possible by adjusting the knobs and the amp ..
- I love the power of the riffs and lead notes in the blues lines are "hot" .. there is nothing wrong, big sustain.

- 10 years
- The best value for money, the least .. its rating rises but snobbery Gibson shade.
- Yes over 50!
- Perfect, amazing view
- Yes without thinking.
Did you find this review helpful?yesno
»
Read the 7 user reviews on the Orville Les Paul Standard »