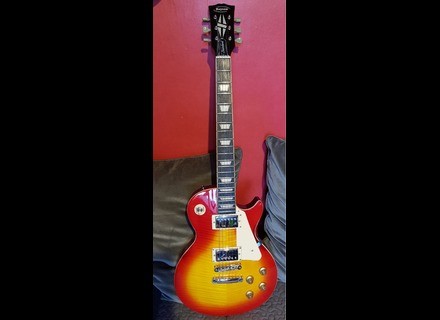 Royson lp std
4
I do not know what country it was made, but given the price I would say certainly in Asia.

short as a true

In terms of using all the same bin as a real but less anyway.
Handle relatively thick 50's rather typed fast enough. access to the acute form of paul not easier but eventually get used to it.

the micro switch works well and does not crachotte pots are progressive.

Like all the les paul it weighs heavily involved and it can stand a long tiring.

In fact as the model is based on love or not love.

The sound on playing rather squier telecaster type I was looking for a skyscraper with a warmer sound rounder and that's what I had.

However, the pickups lack a little fishing I think the addition of two di Marzio bring more fullness and power. Given the quality of the mechanical violin and I will invest in a good microphone to finish the thing.

So overall its a very correct and typed les paul but perfectible I edit this post once I get it upgraded.

I use this guitar since early this year and given its very affordable price I have to say it perfectly fulfilled its function and finally to complete my armada. Is not basically a big fan of les paul I think it's a good compromise to start a mess with this type of guitar so specific. So u value for money more than acceptable.