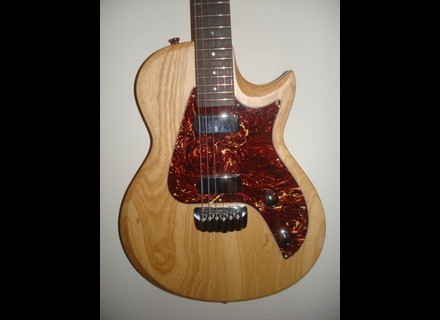 SolidBody Classic, LP-Shaped Guitar from Taylor in the SolidBody series.

Taylor SolidBody Classic
2
Let me say this up front. I bought one of these on a whim an took it home for a few days. These are my observations.

Pretty simple configuraion. USA made. Mini humbuckers. Ash body I believe. Rosewood fretboard. Basically it's Taylor's take on a Les Paul with some spinoffs. The bridge design is unique and very interesting.

To start, this guitar would not stay in tune. I'm pretty sure it was either the nut or the tuners themselves. I actually thought the bridge was pretty solid. But I couldn't keep it in tune. I would tune up, play a few runs and realize it was out of tune again. No idea why. I could barely even do an in home demo because of this problem. Feel wise it's pretty decent, except for a couple of issues. For one thing the guitar is really small. And it feels like it in your hands. I'm not a big guy, but I don't like playing a guitar that feels like it was made for Taylor Swift. Seriously, it's that small. There's also a balance issue that bothers me when I'm sitting down. It flops all over the place. To top it all off the knobs feel cheap. Come on Taylor? I heard these were very solid guitars. They feel like near junk.

The sound isn't much better. I was expecting something like a les paul with more clarity. Acoustically this axe sounded awesome. VERY resonant due to Taylor's neck joint design which had me hopeful. Maybe this tiny guitar had some bite? Not so. The mini hums sound muddy and undefined. Awful really. Maybe 'm just not a fan of these mini hums or something but to me they sound lifeless. No punch or articulation. I tried it through a number of setups. Matchless Spitfire combo, Splawn Quick Rod, Fender Super Reverb. Sounded muddy and sterile through them all. Not to mention the tuning issues. I have heard some dogs but this was really a dog sounding guitar.

I can't believe this is a USA made guitar. Maybe I got a dud. So many issues that I could go on but I feel like I covered it. Not only was the feel bad but the sound was bad too. I am a big Taylor fan but this is just shameful. They need to go back to the drawing board. I returned this guitar very quickly. I'd rather have a Les Paul Studio than this thing. It's not even worth half what they're asking.