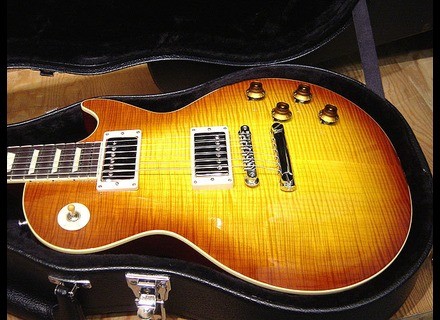 The young lady shows perfectly finished. Not a pet slime, not a binding awry, not a hoop affixed wrong. The box is the same as the LS sries multimdia. So we can do better at cushioning, but great for its lightness and its stability.

The guitar includes the great classics of the genre and thus did not score that surpasses the 8. The Les Paul has its advantages but also some inconvnients. Try It Out All LS360 had to weigh lightly LOWER Tokai LS150 and 195s. With the Les Paul Gibson 1959RI, it is one of Les Paul "original concept" most lgres. Ach gut!

Vibration behavior is not better than the premium sries below. But he remains as healthy (no vibration ngative, just life).

Note that the grip is still a bit simpler than its sister LS195 (LS150 ex), because softer bar. It scabies, see surpasses the original in this regard RI59 l. Its handle, lightly affine is also the perfect base for those who have small hands. Paluchards great attention to, because then you can handle apparatre as very narrow.

The noise level, this LP is assurment in finesse. There is a softer behavior than other brand Tokai, less earthy too. The ct Twangeux and frank attack on her younger sisters lightly fades to give way softness, and clarity DEFINITIONS. Tried before a Navigator and a Gibson RI59, the Tokai parat never do "worse". Simply, it proposes a variation of the genre with his stick a little thinner and his great gentleness of play

Yes, I would put 9. Have a sweet guitar is good, but for me it lacks that ct earth in the lower back.

The 360 ​​is one of his guitars that do not meet only once in a lifetime. In France may never be same. My opinion on this guitar is rather positive, but it will take you a bowl for the shovel. L or its smaller sisters were conspicuous by their report qualitprix bluffing, the 360 ​​s'avre Plutt guitar mature and destined be a "tool" than a good deal. Exclusively for connoisseurs so.