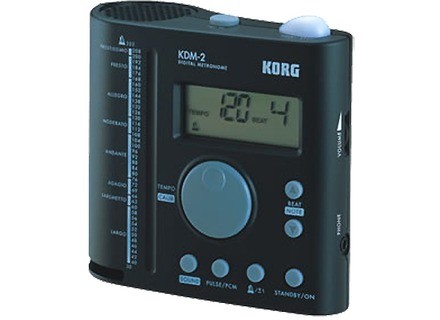 
2 user reviews
Find it in the classifieds starting at $38 Avg used price: $36

All user reviews for the Korg Kdm-2

Korg Kdm-2
5
I was looking for a metronome that allowed me to tap in the tempo, was loud enough so I could play my dreadnought along with it and had a sound that didn't hurt my ears after a few hours of playing. I looked hard and eventually only found the KDM-2 by Korg. A lot of the other metronomes try to be as small as possible or cut corners elsewhere. This one is bigger than most of its competitors but I find it to be still small enough to be taken out.

The advantages of a bigger size are of course:
- bigger display
- louder and better sounding click
- normal batteries can be used

This metronome also doesn't make the mistake that it tries to be a mini-drum-machine...it is just a very good metronome. You can adjust the beats and have even presets for clave and similar rhythms. The tap button is very present on the top of the unit and the accent is also visible via an LED that either lights up green or red.

The only thing I have to complain is that they didn't think of building in an 'auto-off' function...so don't forget to turn the unit off when you're done using it. The batteries do last a long time but after a week or two of just being turned on even they will run dry.

Bassmazigh's review (This content has been automatically translated from French)" Versatility, a good point."

Korg Kdm-2
4
The main motivation behind my purchase silent rhythmic versatility but s'avre than I used that little rev. This tight deadlines in cases trs particular, I am glad to be able to type in the Latin 9 / 4 230bpm. ^ ^ (Note: I never was but should be funny.)

I use this mtronome since October 2010 battery first then the bass. The particular feature I like most: the tap-in feature that allows you to type in the tempo of two simple pressure on the device. The feature I like least: the HP Less than playing the flute, is not anything. This is the first model I tried it and it suits me well trs.

In my case, the Rapoport qualitprix trs is correct.
If I had to make another choice with the exprience, I would turn over to the BEATLAB of the same brand.
Did you find this review helpful?yesno
Cookies help us improve performance, enhance user experience and deliver our services. By using our services, you agree to our use of cookies. Find out more.